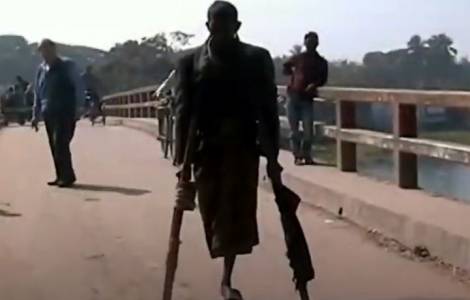 Khulna (Agenzia Fides) - "When the first Xaverian missionaries arrived in what is now Bangladesh in 1952, there were few Christians in this area of the Indian subcontinent. At the end of World War II, Greater India was divided into two parts: India on one side, West and East Pakistan on the other. The first Xaverian missionaries arrived in Khulna, a city in the southwest of East Pakistan, which in 1971 will become, after the war for independence, Bangladesh", reports in an interview with Agenzia Fides Father Sergio Targa, a Xaverian missionary in Bangladesh, speaking of how the spiritual children of St. Guido Maria Conforti took their first steps in the Asian country of the subcontinent.
"Since then - says Father Sergio - we have dedicated ourselves to the proclamation of the Gospel, pastoral care and the administration of the sacraments, and the founding of Christian communities and new parishes. This is how the diocese of Khulna was born. In the mid-1980s, in addition to pastoral work in the newly established parishes, some confreres began their work among the poorest of the population, the Hindu outcasts, the tribal minorities and the poor Muslims. In 1993 - he continues - we opened a new parish in the diocese of Mymensingh in Northern Bangladesh. Currently, we are managing a parish among Christians from Hindu outcasts in Satkhira, in the diocese of Khulna, and a parish in Noluakuri, among the tribal peoples in the diocese of Mymensingh".
"In order to make our presence in Bangladesh more concrete - explains the missionary - we then decided to 'go out' of the parishes and go among the poor: we offer our support to the various groups, where we have set up 'our home', in order to be present among them and to economically help the children of the poor to go to school. "The commitment of the religious also reaches out to Hindu outcasts, poor Muslims and indigenous peoples". These groups - he stresses - not only suffered from school marginalization because they do not have the financial means to send their children to school, but they also suffer from social exclusion".
In order to promote friendly relations between different ethnic and religious groups, the Xaverian missionaries founded a center for interreligious dialogue in Khulna: "The goal - reports Father Sergio - is to create an 'ideal group' between Muslims, Hindus and Christians: people who respect each other, despite the different beliefs, help each other in need and accept to make a icommon path of life. That is why we regularly organize educational work with various initiatives in schools: we go to the second and third grade classes and with the help of digital aids, we address the children and invite them to work for dialogue and respect for all".
The projects of the Xaverian missionaries also include the protection of minors from abuse in families and unaccompanied street children. For more than 15 years, Father Sergio has been committed to the fight against the phenomenon of child marriage in Bangladesh. "Often times, parents don't let their daughters go to school because they think it's a lost investment, as they marry men who are much older than they are, but often end up slaves to the groom's family. By attending school - he concludes - we want girls to learn to understand that they themselves have value, and that they are proud to be women and not to be subject to the patriarchal pattern that permeates society". (ES-PA) (Agenzia Fides, 29/5/2021)

AMERICA/DOMINICAN REP. - "Walking together, not only on the level of faith, but also on a human level": National pastoral meeting

ASIA/MYANMAR - After arrest by local militia in Chin State: priest and catechist return to pastoral service