AFRICA/NIGERIA - Protests in Abuja against kidnappings; the Bishops: "Citizens are losing faith in the State" 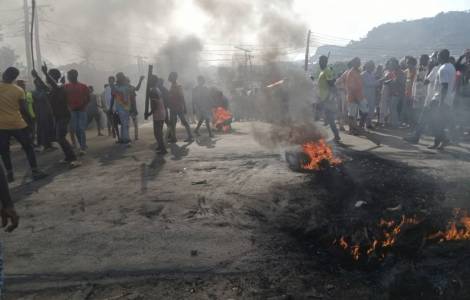 2021-09-02
73 school pupils kidnapped; the Bishops: "Too many kidnappings of children. We risk a traumatized generation of young people"

2021-07-07
Resignation and appointment of bishop of Abakaliki

Abuja (Agenzia Fides) - Hundreds of protesters took to the streets of Abuja, the federal capital of Nigeria yesterday, May 24, blocking a highway, to protest against the increasing cases of kidnappings for ransom, which are affecting citizens of all social groups, including the poorest. Several people blocked the highway between Abuja and Kaduna, which leads north, with burning tires, shouting "we must stop the kidnappings". It should be remembered that among the kidnapped there are several priests, the last of whom, the seventy-year-old Fr. Joe Keke, who is still in the hands of the kidnappers. Fr. Keke was captured on May 20 in the night assault on the parish of St. Vincent Ferrer in Malunfashi, in Katsina State, together with Fr. Alphonsus Bello, whose lifeless body was found the next morning (see Fides, 21/5/2021). Several Catholic leaders are making themselves heard to ask for more security for all. In addition to the Association of Catholic Jurists, which has asked the government for an urgent summit among all interested parties to address the issue of insecurity (see Fides, 24/5/2021), several Bishops have expressed their concern "Nigeria is a confused State with no direction since no one knows where we are going or where we come from", said His Exc. Mgr. Matthew Hassan Kuka, Archbishop of Kaduna in his homily on Sunday May, 23. "Citizens are losing faith in the government because it fails to fulfill its main constitutional responsibility which is the protection of the life and property of its citizens", warns His Exc. Mgr. Stephen Dami Mamza, Bishop of Yola. The Director of Social Communications for the diocese of Makurdi, Fr. Moses Iorapuu speaking at the 13th seminar of the Diocesan Council of the Laity in Makurdi, lamented the "massive wave of persecutions" in the country, in particular in the State of Benue, which led to the displacement of Christian communities, urged the lay faithful to carry out an active role in protecting their communities as their passivity is only encouraging their attackers. "The inability of the authorities to stop the fundamentalists as they continue to kill, rape, destroy homes, cultivated fields and kidnap, is a confirmation of the complicity on the part of the federal authorities. Among the thousands killed by the armed pastors were also priests, catechists", says the priest. These crimes are attributed to the Fulani shepherds for reasons of sharing pastures and water resources, but according to Fr. Iorapuu "the fact that people are kidnapped far from agricultural land, killed in church or while sleeping", shows that there is another motivation, which aims to expel these populations from their lands. (L.M.) (Agenzia Fides, 25/5/2021)

AFRICA/CAMEROON - Vicar general of the diocese of Mamfe kidnapped