ASIA/SYRIA - Catholic Patriarchs and Bishops: sanctions against Damascus "to be removed", Palestinians victims of "brutal aggression". And they thank the Pope 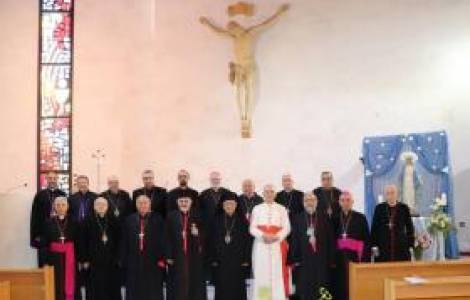 2021-10-20
Melkite Patriarch Youssef Absi: the Gospel can be proclaimed only for "a force that is not ours"

2021-05-21
Catholic Patriarchs and Bishops: sanctions against Damascus "to be removed", Palestinians victims of "brutal aggression". And they thank the Pope

Aleppo (Agenzia Fides) - The economic sanctions of Western countries against Assad's Syria, culminating in the so-called "Caesar Act" issued by the US Administration led by Donald Trump, are unjust and must be removed, as well as the repressive practices and "brutal aggression" suffered by Palestinians in the Holy Land. The Catholic Patriarchs and Bishops strongly hope for this, gathered from 18 to 20 May in Aleppo, at the headquarters of the Apostolic Vicariate for Catholics of the Latin rite, to take part in the annual session of the Council of Heads of Catholic Churches present in Syria.
The final communiqué of the ecclesial meeting attests the pastoral concern and the realistic and non-conformist outlook with which the local Catholic Churches share the tribulations of the peoples of the Middle East. In the three days of meetings, it was reported that the participants in the meeting questioned how to help mitigate the devastating impact of economic sanctions on the daily lives of the Syrian people. In this regard, Patriarchs and Bishops have paid particular attention to the work carried out by Caritas Syria for the benefit of all components of Syrian society, considered a precious tool to show the Church's proximity to the growing multitude of Syrians forced to live below the threshold of poverty. The common reflection of the Heads of the Catholic Churches present in Syria focused with particular apprehension on the exodus of young Christians who left the country during the terrible years of the conflict. The participants in the meeting questioned how to seek remedies in the face of this emergency and ensure "that our children remain in their land, since we believe that our presence and witness in this country is necessary and important". Catholic Bishops and Patriarchs of Syria, in the days of their annual Council, also had the opportunity to reflect together on the positive impacts recorded in Syria and throughout the Middle East, especially on Islamic-Christian relations after Pope Francis' apostolic visit to Iraq last March. The participants in the ecclesial meeting also sent a letter to Pope Francis, expressing gratitude "for his concern for our country, his defense toward the humiliated, the oppressed and the marginalized, and his constant appeal to universal brotherhood, expressed with particular force in the Encyclical 'Fratelli Tutti' ". In the final part of the communiqué of their meeting, Catholic Bishops and Patriarchs also invited Syrian citizens to take part in the next presidential elections, scheduled for next May 26, exercising their right to vote according to their conscience, and taking into account the national interest, in the context of conflicts and crisis factors that torment the Middle East. The communiqué ends with an invocation to the Almighty to remove "the black cloud that has been hanging over Syria for ten years"; with the homage paid to the fallen soldiers and "all those who work to safeguard Syria", and with the invitation addressed to Syrian Christians and all their fellow citizens "to be patient, to keep hope and to work together, hand in the hand to rebuild modern Syria and design its future" in the sign of reconciliation and peace. Italian Cardinal Mario Zenari, Apostolic Nuncio in Damascus, also took part in the annual session of the Council of Catholic Patriarchs and Bishops of Syria, chaired by the Syrian Catholic Patriarch Ignace Youssif III Younan and the Melkite Greek Catholic Patriarch Youssef Absi. (GV) (Agenzia Fides, 21/5/2021)

ASIA/SYRIA - Patriarchs and Bishops gathered in Aleppo: "unsustainable geopolitical pressures" on the peoples of the Middle East