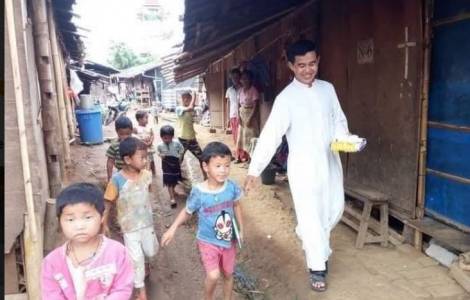 Banmaw (Agenzia Fides) - The Myanmar army has arrested Father Colombano Labang Lar Di, a Catholic priest from the diocese of Banmaw.
According to information confirmed to Agenzia Fides by the local Church, the priest was arrested on May 14 while on his way to the city of Myitkyina where he was supposed to collect aid funds to support poor families who are unemployed and who are participating in the disobedience movement against the military coup that took place in Myanmar on February 1. According to people close to him, the priest helped many civilians. He assisted and brought humanitarian aid to those who took to the streets or joined in one way or another in the peaceful demonstration, working in a spirit of solidarity and Christian charity. The news of the priest's arrest, which immediately went viral on social media, has generated reactions from civil society and the Burmese Church and marks another step forward in military violence, who intimidate Catholic personnel and religious leaders. According to some reports, the priest should have been released but the Banmaw parish where the missionary works has denied rumors of his release. Many priests, men and women religious throughout the country continue to help the civilian population, helpless and defenseless, destitute or unemployed, by providing them with humanitarian aid and food supplies. This service is now seriously threatened. Many professionals and workers in Myanmar, whose work is vital to the country's economy, are leading the Civil Disobedience Movement (CDM) against the military junta. Health workers and doctors, bankers, lawyers, teachers, engineers, civil servants across the country have called on the military to restore democratic institutions by refusing to return to work. Zwe Min Aung, surgeon in Naypyidaw explained that "this special boycott does not have a leader but was born spontaneously from below, to protest in a peaceful and non-violent way", and that it takes place and spreads mainly thanks to social media. In response to all this, the military junta on May 16 fired over 150,000 teachers from schools at all levels, from primary schools to universities, arresting a total of 10,000 civilian staff across the country. Since February 1, the army has arrested hundreds of members of the National League for Democracy, the party that had won the elections in November 2020, led by leader Aung San Suu Kyi, who is also under arrest. The Catholic diocese of Banmaw, which has 34,000 Catholics, is located in the Kachin state, in northeastern Myanmar. (JM-PA) (Agenzia Fides, 17/5/2021) 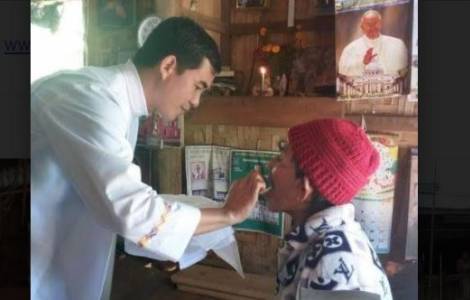