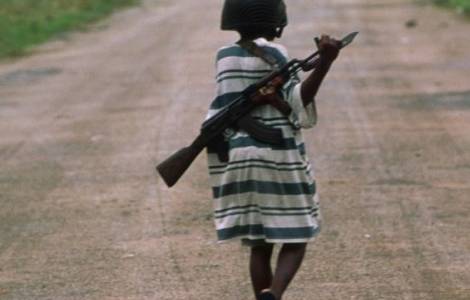 Dungu (Agenzia Fides) - "The problem of child soldiers is very complex and, in particular, in the Haut Uele region, in the north east of the country, a devastating conflict lasting many years devastated society in this part of the Congo.
Children in particular suffered most from this: they have lost their parents, they have dropped out of school and, it is for this reason that our measures are aimed not only at providing aid to those who have had war experience as soldiers, but more widely to all those children we consider the most vulnerable, that is, those who have suffered the indirect consequences of the war: children who have been mutilated or who have witnessed violence in their communities", said Father Georges Mizingi, head of the Augustinian Order Vicariate in the Democratic Republic of the Congo, in an interview with Fides about the project to reintegrate vulnerable children of the Augustinian missionaries in the city of Dungu. In recent years, the inhabitants of Dungu have been the victims of repeated attacks by the Ugandan Lord's Resistance Army (LRA) by Joseph Kony, in which innocent civilians have been victims of violence, rapes and children have been kidnapped to serve as soldiers in their own ranks. An estimated 30,000 child soldiers have been recruited in this area of the country, and many are still in the hands of various paramilitary groups. Most of them are between 8 and 15 years old and 40% are girls. "Many children - says Father Georges – volunteer as soldiers because they were deceived, others because a family member was killed or a victim of war. They therefore decide to join armed groups to seek revenge. With our project - continues the religious - we want to raise awareness among local communities for the problem of the education and protection of children". Together with the Congolese Augustinian friars, the foundation "Fondazione Agostiniani nel Mondo" is involved in the project, which began after an initial study phase in February 2020 with the construction of a dormitory that now looks after many children and offers hospitality to about 100 young people and that with its day program assists at least 1000 young people a year. "In general, all children come to our facilities in disastrous physical, psychological and health conditions - says Maurizio Misitiano, Executive Director of the Foundation - "There are children whose feet are marked by the long marches of the escape. They walk for days without shoes in the forest. Others - he continues - instead arrive dehydrated because they eat poorly, do not have access to drinking water when fighting in armed groups where they are treated in an inhumane way, but the most delicate aspect concerns the trauma that everyone has suffered. There are cases in which cognitive and communication disorders occur. The first step, in fact, physical rehabilitation - explains the executive director - then we accompany them to the center and there the children begin a path of social rehabilitation. This is where psychologists intervene and with their support the children follow a rehabilitation process with a weekly program. In addition to hospitality - explains the Executive Director - the center offers training courses in carpentry and IT. It is planned to open a farm with cattle, pigs and fish breeding. Furthermore, a service for reintegration into school and work is guaranteed". A new path that has been started, he concludes, "involves accommodation in host families. Families who have made themselves available: this is temporary accommodation, in which all the individual components have been prepared to face the problems of these families and to protect these children". (ES) (Agenzia Fides, 15/5/2021)