ASIA/PALESTINE - Minister al Maliki: there is no Holy Land without Christians 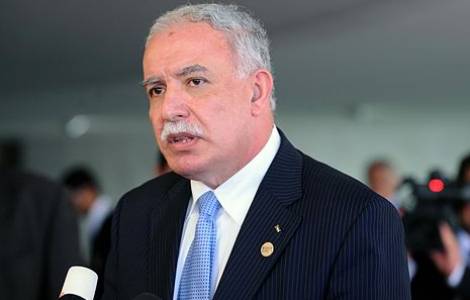 Rome (Agenzia Fides) - When you say that Palestine is the Holy Land, "you cannot talk about the Holy land without Christians", and Palestinian Authorites consider Palestinian Christians as an "integral, essential and solid part of the Palestinian people, it doesn 't matter what the percentage of Christians is in Palestine", emphasizes Riyad al Maliki, Minister of Foreign Affairs of the State of Palestine, enumerating in this regard also some institutional measures ordered by the Palestinian Authority with the aim of countering the progressive numerical erosion of the Christian component of Palestinian society. "We" - Minister al Maliki explains in an exclusive interview to Agenzia Fides "don't see Christians as a different community. They were in Palestine before the Muslims. Therefore if we talk about seniority, they have priority over Muslims in Palestine". The representative of the Palestinian government also traces the decision to increase the minimum quota of seats reserved for Christian citizens in the future Parliament of Palestine from 5 to 7 (out of a total of 132): "Christians", Al Maliki explains, "are a solid part of the Palestinian People. Even if they represent less than 7%, they should get minimum 7% in order to show that we want Christians who emigrated back. This is why it was decided that they should be over-represented in the parliamentary assembly". When you say that Palestine is the holy land, you cannot talk about the Holy land without Christians". In fact, in Palestinian society there have also recently been signs of intolerance towards Christians. In December (see Fides, 21/12/2020) the Palestinian Islamist Party Hamas had instructed Muslims to limit their "interaction" with Christian Christmas celebrations, in the Gaza Strip. "This kind of approach" remarked categorically Minister al Maliki, "is something we do not accept because it is not part of our culture, tradition, our history ... and this is why so many religious and non-religious leaders have expressed dissent from that pronouncement in other parts of Palestine, and Hamas eventually withdrew it… What is important to us" adds the Minister "is what President Mahmud Abbas does. He is personally attends the Christmas midnight mass, he is a Muslim. What the President does, should reflect what Palestine should do. Our message is brotherhood, coexistence, we are the same family, one is Muslim and one is Christian. One cannot play with the composition of the Palestinian society. For us" continues the Palestinian Government Representative "Christianity is an essential component. That's why we have a presidential decree that the mayor of Bethlehem has to be always Christian .... the mayor of Ramallah has to be always Christian, and the same is for Beit Sahour, and Beit Jala ... it doesn't matter what the percentage of Christians in such cities, we want them to stay as Christians".
Minister al Maliki was able to speak on Thursday, May 6 with Archbishop Gallagher on the condition of Christians in Palestine and throughout the Middle East, during a meeting with him at the Vatican. "With the Holy See" the Minister tells Fides "we want to stress the importance of our bilateral relations, to tell them about about the situation in Jerusalem, where there is an increased tendency to attack mosques and churches and to prevent both Muslims and Christians from having access to their holy places and participate in mass and prayers". He also touched other issues with Archbishop Gallagher al Maliki, including "this phenomena of evangelism spreading all over the world", a phenomena that "really should worry the Catholic Church but it worries us as Palestinians, because the evangelists are having anti- Palestinian tendency". Al Maliki's visit to Rome took place in the context of a European tour carried out by the Palestinian Minister to meet, among others, the Russian foreign Minister Serghei Laveov and the Italian foreign Minister Luigi Di Maio. The intent was to verify what European institutions and countries can do "in order to push Israel to allow us to hold elections in Jerusalem, not only in west bank and Gaza but also in Jerusalem. The Palestinian Authority were forced to postpone the elections because Israel did not respond to their request to do it in Jerusalem. The foreign Ministers of the European Union are having a meeting on Monday "and we also want the countries to raise the issue in the meeting in order to collectively pressure Israel so it allows us to hold elections in Jerusalem". There have been no elections for 15 years, and some observers say Palestinian Authorities could find an alternative solution. "Jerusalem" Minister Maliki responds to these comment "is located in Jerusalem, it is not in Ramallah ... voting there means voting there. It is not a technical issue, it is connected with the issue of the status of Jerusalem, as a part of the occupied Palestinian territory. I have heard: why don't you hold elections in consulates, or in embassies or in UN offices ... or even in churches or mosques… but this" continues the Minister "is not acceptable. The whole issue of elections is about Jerusalem. To go towards elections without Jerusalem, it is like accepting what Trump said. Jerusalem is an eternal and undivided Capital of Israel. It's a political issue. It's not technical. We have postponed the elections for 15 years, we can do that more for 1, 2, 3 months but you can't give up on the Jerusalem issue". In the previous elections, the Minister recalls, Palestinian polling stations were also opened in East Jerusalem, because "there is an agreement signed in 1995 in Washington, and in that agreement Israel accepts that Palestinian carry out elections on all Palestinian territory including Jerusalem. Then, the Israelites heard what Trump told them, and now they say that if they allow the elections to take place in Jerusalem they are giving up that part of east Jerusalem to the Palestinians. The name is elections, but in reality the real issue is about Jerusalem". (GV) (Agenzia Fides, 7/5/2021)