ASIA/TURKEY - President Erdogan criticizes President Biden's decision to use the term "genocide": "Look in the mirror" 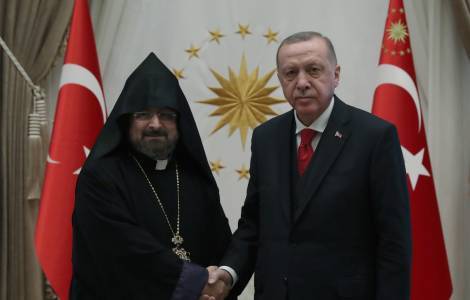 Ankara (Agenzia Fides) - "I pay tribute to the Ottoman Armenians who lost their lives under the difficult circumstances of the First World War, and I would like to express my condolences to their descendants", said Turkish President Recep Tayyip Erdogan, in the message addressed to Sahak II Maşalyan, Armenian Patriarch of Constantinople, on the occasion of April 24, the date on which the Armenian communities around the world commemorate the massacres of Armenians on the Anatolian peninsula between 1915 and 1916. In his message, the Turkish President emphasized the centuries of coexistence between Turks and Armenians in Anatolia and emphasized the belonging of all "to the same human family, regardless of ethnicity, religion, language or skin color". Erdogan stressed that "our common culture has been enriched and developed with the knowledge and sweat of many doctors, engineers, lawyers, businessmen and professionals trained with the contribution of the Armenian community also in the fields of architecture, music and art. We must not allow Turks and Armenians to forget these centuries of coexistence "and regret" the attempt to politicize the discussions that historians should objectively hold while turning it into an instrument of attack against our country". The words with which Erdogan condemned the decision of US President Joe Biden, who announced in a message published on the official White House website on April 24 that the term "genocide" would be used again to refer to to point out the massacres that the Armenians suffered in the areas of what is now Turkey in the early years of the First World War. Jimmy Carter and Ronald Reagan had done this before him, but then the term disappeared from the vocabulary of the US presidents from George W. Bush to Donald Trump. In his first reactions to Biden's announcement on Monday, April 26, at the end of a government meeting in Ankara, the Turkish President reaffirmed to the media what he believed to be geopolitical relevance that the controversy over the "Armenian genocide" is thereby gaining. Erdogan recalled the possible "devastating effects" that Biden's decision could have on bilateral relations between the US and Turkey and called the US President's decision a concession to "radical Armenians and circles hostile to Turkey". According to Erdogan, Joe Biden's words "about the painful events that the Armenians experienced are baseless, unjust and contrary to the truth", also because "no one like our nation has suffered for those events", and "those who believe that Turkey has buried that pain and moved on is wrong. Erdogan emphasizes in this context that the Turks "are the ones who have suffered the most". The Turkish President renewed his offer to set up a joint commission of scholars to shed light on the "painful events of 1915" on the basis of documents that are also available in the Turkish archives: "We argue with facts, with history, not like President Biden", added Erdogan, reiterating that Turkey should not be branded with the accusation of genocide. "Whoever speaks in these terms", warned the Turkish leader "first look in the mirror" and added among other things that "everyone knows the history of the Indians". The government in Ankara does not recognize the massacres of the Armenians in Anatolia between 1915 and 1916 as planned extermination on an ethnic basis and regards these events as a tragic consequence of the chaos surrounding the war that led to the dissolution of the Ottoman Empire. (GV) (Agenzia Fides, 27/4/2021)