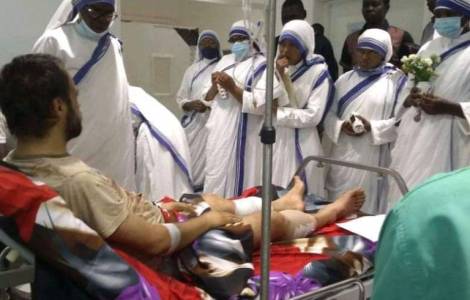 2021-09-16
"Suffering is God's accomplice": a small church is born inside the hospital of Naandi

2021-09-04
Ending the Culture of Murder: Call for Peace by Religious Leaders in Western Equatoria

Rumbek (Agenzia Fides) - "During the night we learned of the attack against the newly elected bishop of the diocese of Rumbek, Fr. Cristian Carlassare. The Comboni missionary was immediately transported to the hospital in Juba". The news reached Agenzia Fides from a local source who stressed the climate of violence and tribalism that prevails in the region and continues to worsen. "Fr. Cristian was beaten, then 4 bullets were shot in his legs. According to the first reports, the attack was apparently planned to scare him so that he will not be consecrated bishop". In fact, the consecration Mass of the Comboni Missionary as bishop of the diocese of Rumbek is imminent (see Fides, 8/3/2021) which since the death of Msgr. Cesare Mazzolari in 2011 remained vacant.
He arrived in Rumbek on April 16, with a welcoming ceremony marked by the dinka ritual (the majority ethnic group in the area), the date set for the episcopal consecration was May 23, Pentecost Sunday. According to information sent to Agenzia Fides, the Bishop will probably be transferred first to Juba and from there to Nairobi for a period of treatment and convalescence in suitable and equipped hospitals. Christian Carlassare, the new Bishop of the diocese of Rumbek, - the youngest Italian Bishop at the service of the Church, for 16 years in South Sudan - has left Malakal, in the Upper Nile State, to immerse himself in a new reality, in the State of Lakes. His story of passion for South Sudan, therefore, continues and deepens, in the wake of a presence of closeness of the Catholic Church to the youngest country in the world, created in 2011.
In the recent interview with Fides (see Fides, 25/3/2021) the Bishop recalled: "I I believe that it is necessary to take a step forward in matters of catechetical formation and evangelization. My predecessor had started a catechetical center but it was at a very difficult time, before independence. The time has come to relaunch pastoral action and direct evangelization. 1.8 million people live in Rumbek, including 200,000 Catholics and 800,000 Protestants. The Catholic Church, in any case, is seen by all the faithful, including other religions, with great respect, both for the tradition of proximity to the people in the social and health fields - as well as for the promotion of peace - and for what Pope Francis is doing with his constant interest in the country. For us, it will be fundamental to put Christ at the center and to foster the experience of Christ. It is possible to have many people in church but to perceive a limited experience of the presence of Jesus". The young age of Mgr. Carlassare is in line with the needs of a very young people of faithful and more than 50% of the population is under 18 years of age. The new generations are drawing closer to the Christian faith. (FS/AP) (Agenzia Fides, 26/4/2021)