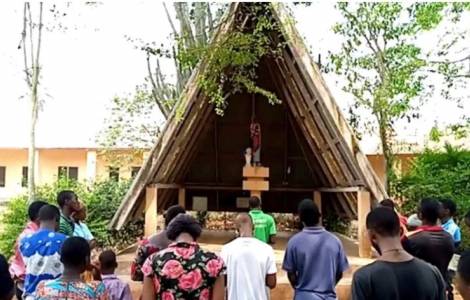 2022-01-17
Opening of the Jubilees of the Pontifical Mission Societies: all the baptized must become aware of their missionary identity

2021-12-02
"It is a serious mistake to think that the missionary work of the Church is over": 160 years of evangelization celebrated

2021-04-15
President Talon re-elected; tensions on the eve of the vote: representatives of religious confessions in meditation at the tomb of Mgr. Isidore de Souza

Cotonou (Agenzia Fides) - "The missionary work was the seed from which the Beninese clergy and entire generations of convinced Christians germinated, whose vision and action have contributed to making our Church in Benin a Church capable of enriching the entire universal Church with its gifts". Thus writes Romain Hounzandji, a Catholic university professor, on the occasion of 160 years of evangelization in Benin. It was April 18, 1861 when Fathers Francesco Borghero and Francisco Fernandez, missionaries of the Society of African Missions (SMA), reached the Slave Coast, as South Benin was then called. They were not the first missionaries to come into contact with the subjects of the powerful Kingdom of Dahomey, but for the first time there was a project by the Catholic Church to create a stable presence of missionaries in those lands, already frequented by Europeans for the trafficking of slaves.
Father Didier Affolabi, rector of the major Seminary of Saint-Gall de Ouidah, remembers that one of the first actions of Fathers Borghero and Fernandez, already in 1862, was to open a school for children in the area. Today, in a country of only 8.8 million inhabitants, of which 27% are Catholic, there are 523 Catholic educational institutions, including 113 kindergartens, 266 primary schools, 138 secondary and preparatory schools, 5 universities and a School for teacher training.
A Catholic journalist speaking about the challenges of the future of the Beninese Church comments: "The Church of Benin faces the immense task of in- depth evangelization and unfortunately many Catholics still have one foot in the church and one foot in the various sanctuaries of traditional religion, where they are promised power and wealth at a good price".
"In this century and a half of presence, the Catholic Church has contributed to building the Beninese nation, and has had a great influence in the social sectors of education, health, politics, the formation of consciences, culture of peace", highlights Modeste Kpodéhoto, financial operator who spoke for the occasion regarding evangelization in the country.
"We must succeed in transforming the Beninese man from his roots with the rod of the Gospel; reached by the message of Christ in the depths of his being can be a light that radiates good around him, for the well-being of the Church and the Nation", concluded the philosopher Paul Kiti. (MP/AP) (Agenzia Fides, 14/4/2021)