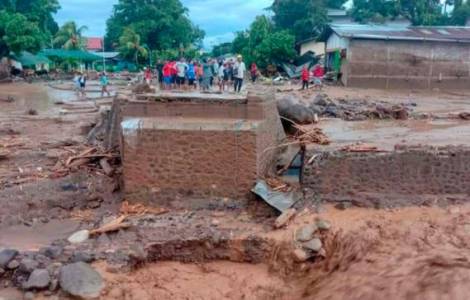 Jakarta (Agenzia Fides) - It is an Easter time marked by suffering and hardship that the Indonesian Christian communities is experiencing in the East Nusa Tenggara province in Indonesia, where there is a strong Christian presence, in some territories even a majority, with the island of Flores, called the "Catholic heart of Indonesia". Floods and landslides triggered by tropical cyclone Seroja struck Indonesia's province, affecting at least 12 surrounded areas. Since Holy Thursday many faithful were not able to participate in the Easter celebrations and lived an Easter as displaced persons, suffering for losing their loved ones or their homes and properties. Heavy rains "have caused numerous and serious floods, similar to tsunamis that have devastated much of the island", a Catholic source on the island of Flores told Agenzia Fides.
While the death toll is worsening (more than 160 people, 72 missing) and displaced people (more than 8,400), civil institutions have organized the aid network while the Indonesian Church, with Caritas, has launched an appeal for solidarity that has already started fundraising to meet the needs of affected communities.
Cardinal Ignatius Suharyo Hardjoatmodjo, Archbishop of Jakarta and President of the Bishops’ Conference of Indonesia, in a video message invited Catholics to "show compassion for the victims of the floods" that hit the predominantly Catholic province of East Nusa Tenggara. Donations and aid can be sent to bishops' charities such as Caritas Indonesia and the Socio-Economic Development Commission. "Compassion is a materialization of our faith" and "can be a blessing for our brothers and sisters", he remarked.
Mgr. Aloysius Sudarso, Archbishop of Palembang, President of Caritas Indonesia, known locally as "Karuna", stresses that "the Catholic Church in Indonesia will not remain silent. Our care for all those who suffer is truly a concrete form of our faith. We have just celebrated Easter, proof of God's involvement, through Jesus, in human life", he said. Caritas has already received over one billion rupees ($ 71,400) which will be used in rehabilitation programs for refugees.
Special attention will be given to the approximately 100,000 children from three districts (Kupang City, Kupang and Malaka) who have seen classes and school exams suspended due to the floods. Schools have been closed due to the Covid-19 pandemic for over a year, with lectures and exams held online. Damage to infrastructure and private homes now make distance learning impossible. Educational programs are placed among the priorities to ensure that children and young people can continue to receive education.
Pope Francis, in the Angelus of Wednesday 7 April, expressed his closeness by saying: "I wish to assure my prayers for the victims of floods that in the past days have struck Indonesia and East Timor. May the Lord receive the dead, comfort their families, and sustain those who have lost their homes". (PA) (Agenzia Fides, 8/4/2021)