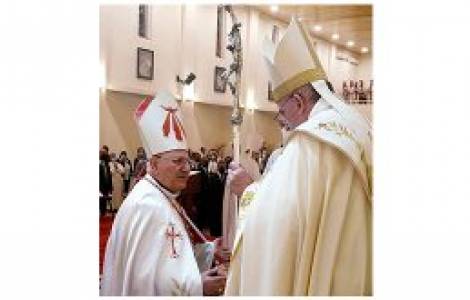 Baghdad (Agenzia Fides) - Pope Francis, in his recent apostolic pilgrimage to Iraq, together with the spiritual comfort and hopes of rebirth for all Iraqis, also left a substantial donation of 350 thousand dollars in the country, to be allocated to initiatives in support of families most affected by the consequences of conflicts, the economic crisis and the pandemic. This was revealed by Cardinal Louis Raphael Sako, referring to the papal donation in the concluding part of a letter he sent to Pope Francis himself to express gratitude to the Pontiff for his visit to Iraq, also on behalf of the local Assembly of Catholic Bishops.
"The donation" Patriarch Sako reports to Agenzia Fides "is intended to be a sign of how real and concrete the Pope's love for all the Iraqi people is. Of the total sum", adds the Iraqi Cardinal, "250 thousand dollars will be managed by Baghdad, while 50 thousand dollars have been sent to the Chaldean archdiocese of Mosul and another 50 thousand to the Syrian Catholic archdiocese which includes Qaraqosh".
The use of the papal donation has already entered its operational phase: "We have already distributed 12 thousand food packages across the country" the Chaldean Patriarch reports to Fides, specifying that thousands of them have also been sent to Najaf, Basra, Kirkuk and Zakho, to be handed over to families who need it most, "Christian and Muslim families, and those belonging to all the other faith communities present in Iraq".
In the letter sent to Pope Francis, Patriarch Sako confides that he would have liked to reach Rome "to thank you for your historic visit to our country, but it is not possible due to the coronavirus pandemic and to travel complications". In the text sent to the Pope, and disseminated by the official communication channels of the Chaldean Patriarchate, the Patriarch reiterates that the papal visit touched the hearts of Iraqi citizens, Christians, Muslims and all other components of the population: "You sowed awareness of the importance of accepting and respecting diversity, behaving as different brothers, called to love each other and help each other to build situations in which every man lives with dignity, freedom and equal rights and duties. We hope" continues the Iraqi cardinal "that this line of conduct, as indicated in your speech in Baghdad, also inspires the intentions of the great world powers". The Patriarch recalls that the Pope's prayers "with us and for us, and your phrase: 'Iraq will always remain with me, in my heart' have left a profound echo that is indelibly impressed in our memory". The Primate of the Chaldean Church also adds that "for us, your Christian daughters and sons, your visit has fulfilled a great dream, and has given us strong support to stay, communicate with others, hope and build trust. We are immensely grateful for your phrase 'you are a living and strong Church', which encouraged us to hope and to move forward with enthusiasm". Concluding his letter, the Patriarch expresses to the Pope "a special gratitude for your gift of 350 thousand dollars in favor of the poor. It will be our joyful concern to help them on your behalf, regardless of differences in religion and ethnicity…". (GV) (Agenzia Fides, 31/3/2021)

AFRICA/GHANA - The Bishop of Wa: "Let's not isolate the mentally disabled"