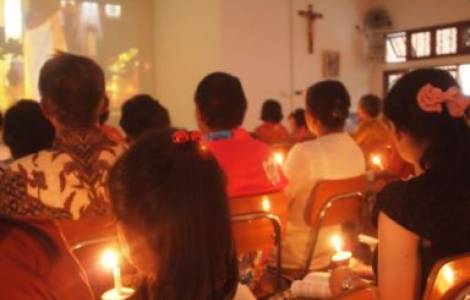 2021-04-09
"Everything is possible for those who believe": a Camillian missionary from the island hit by cyclone Seroja

2021-04-08
Floods in Eastern Indonesia: the campaign of compassion and solidarity is underway

2021-03-23
Towards the Day of Missionary Martyrs: Rufinus Tigau, a young catechist murdered without reason

Jakarta (Agenzia Fides) - "Suicide attacks against churches have already occurred several times. One wonders what the criminal plan is. Such incidents do not happen without financial support or help of networks or organizations. I believe that the time has come for the State security agencies to move decisively to combat this type of terrorist acts". This is what Mgr. Agustinus Agus, Bishop of the Archdiocese of Pontianak, in the province of West Kalimantan, told Agenzia Fides, commenting on the attack on the church of Makassar (in the province of South Sulawesi) which shocked the Catholic community on Palm Sunday (see Fides, 29/3/2021). "I believe that it is urgent to act to put an end to these inhumane acts. When people lose their moral conscience and take the life of others through acts of terror, it means that our humanity has been tarnished and degenerates into brutality. It is clear to anyone that no religious teaching can motivate someone to take the life of others", added the Bishop. "I want to express my gratitude to the civil administration that is trying to address this problem quickly and to assist the victims", he concluded
Father Heri Wibowo, Executive Secretary of the Inter-religious Commission within the Bishops' Conference of Indonesia adds to Fides: "It is necessary to multiply initiatives to promote acts and attitudes that counteract acts of terror and promote peace and tolerance among the Indonesians. This is a key factor to curb radical ideology", adds Father Heri, a diocesan priest of the Archdiocese of Jakarta and a lawyer by profession: "Although initiatives for harmony should be promoted in society, at the same time the state security agencies should take stringent measures to de-radicalize religious fundamentalist who often spread hate speeches and incite violence against other religious groups". "In addition - he continues - it is important that the top leaders of the State issue clear and forceful messages. The State has the task of bringing to justice those responsible for their harmful acts, while religious leaders have the task of promoting the values of humanity, tolerance Inclusion". This is what promoting the message of the Encyclical 'Fratelli Tutti' means: Every man is our brother, despite various differences. This is the call to put our faith into practice", says the priest.
Among the civil authorities, the Catholic Yohanes Bayu Samodro, Director General of the Catholic community guidance, in the Ministry for Religious Affairs of Indonesia, explains to Fides: "No religious teaching motivates its followers to commit harmful and violent acts of terror. There is something wrong with the minds of those extremists who show hatred towards their fellow citizens. We are called to ensure and defend the basis of our coexistence, the Pancasila, and to protect the values of humanity in society".
"Indonesia - he explains - is not a nation based on religious law, but a secular country. Catholic religious leaders must remain calm, without panicking. It is not necessary to cancel all the celebrations. Terrorist groups must not be given the opportunity to achieve their objectives: such as to instill panic". The Director acknowledges that "for Christians who will celebrate Easter, as they enter Holy Week, the most important mystery of faith is approaching: Christ who, dying on the cross, rose gloriously. We can live Holy Week remaining calm, prudent and always vigilant", he says.
Reassuring the faithful, Yohanes Bayu Samodro concludes: "The Ministry for Religious Affairs is working, in coordination with government agencies and law enforcement agencies, to ensure the protection and security for places of worship, in view of Easter and Ramadan.
These efforts must be supported by all Indonesian citizens, showing a courageous attitude that gives the sense of a united nation". (MR-PA) (Agenzia Fides, 30/3/2021)