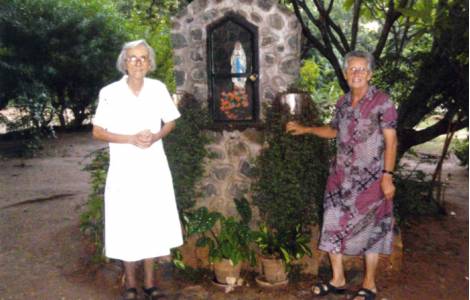 2021-03-30
Two "missionary seeds", dedicated to the unconditional service of evangelization

2021-03-23
Prayer, the key to discerning God's will and his own vocation according to the Bishop of Dedza

Lunzu (Agenzia Fides) - "Two missionary seeds deposited in the cemetery of the Cathedral of Blantyre, two signs of communion between the Churches, two signs of unconditional service to the missionary cause, two strong testimonies". This is how the missionary Anna Tommasi, of the Franciscan Auxiliary Lay Missionaries of the Immaculate Conception (F.A.L.M.I.) wrote to Agenzia Fides, remembering two Italian missionaries who died recently due to Covid-19. The woman refers to Father Pino (Giuseppe) Giannini, a Comboni missionary, and to Germana Munari, a missionary doctor, 82 years old, lay consecrated FALMI, who died in the Archdiocese of Blantyre in the months of February and March 2021 on two particularly significant dates, and were buried side by side.
"The first to die was Fr. Pino, due to the Covid-19 virus. He had come to Malawi as a young Comboni missionary and after an intense pastoral activity he was called back to Italy and then to Kenya, for a service to the congregation, carried out with the same passion. But he never forgot his first love, and four years ago Fr. Pino returned to Malawi, where he served as vice-parish priest at Lisungwi parish. He was preparing to celebrate the fiftieth anniversary of his priesthood when Covid 19 hit him and hospital care could not save him from death. It was February 2, 2021, the solemnity of the Presentation of the Lord and the Day of Consecrated Life".
"A little more than a month later, on March 8, Women's Day, Dr. Germana Munari, who worked as a missionary doctor in Malawi for 47 years, unfortunately died", Anna continues, who lived with Germana these last 15 years. "She had arrived here with the first F.A.L.M.I. in April 1974 to start a hospital in the mountains on the border with Mozambique. A few years later, at the request of the then Archbishop of Blantyre, Msgr. James Chiona, went down to Blantyre, to the Mlambe hospital, where Germana spent the last 40 years of her life, living in simplicity, poverty and humble service to the sick, spending all her energy for them".
"Our hope is that the sacrifice of these two exemplary figures will be like two fruitful seeds of new vocations", concludes Anna. (AT/AP) (Agenzia Fides, 30/3/2021)