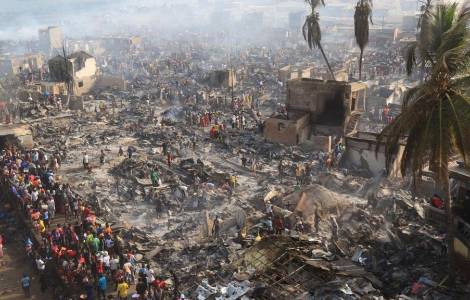 Freetown (Agenzia Fides) - At least 5,000 people are now homeless due to the large-scale fire that devastated the slum of Freetown, the capital of Sierra Leone, on March 24 in the late afternoon.
"The whole community has been wiped out" Freetown Mayor Yvonne Aki-Sawyerr said in a statement posted on Facebook. "Once again, there was no access for the firefighters. A six-storey building under construction blocked all available access", she denounced.
The Mayor stressed that "disaster risk reduction cannot occur without effective urban planning and a building permit regime focused on reducing man-made environmental risks.
"Join us in praying for the victims" she then asked.
The fire broke out around 6 pm on March 24, spreading rapidly along Susan's Bay.
Residents were forced to flee, leaving most of their belongings there, as the blaze progressed. According to the local Red Cross, the death toll is around 80 injured but no victims.
The densely populated city has grown in a chaotic and disorderly manner, without an urban plan or an evacuation or rescue plan.
We remember the tragedy of the night between 13 and 14 August 2017, when a ridge of the mountain collapsed on the village of Regent, 6 miles from Freetown, causing at least 1,100 deaths. In an interview with Fides Fr. Gerardo Caglioni, a Xaverian missionary with a long experience in Sierra Leone, denounced the fact that "during these many years, the rainforest has been swallowed up and everything that the land contained has simply disappeared. In addition, it must be remembered that, on these peeled hills, houses of all sizes were built, without any regulatory plan, without roads, without drainage or sewers, without a minimum of legal conditions to contain any type of abuse" (see Fides, 21/8/2017 ). "Where are the schools, clinics, community and food supply places? Where do they get water for their various needs, especially in the dry period? So many unanswered questions, no growth and development plans, no plans for emergencies": questions that still await an answer. (L.M.) (Agenzia Fides, 26/3/2021)

AFRICA/KENYA - Covid-19: poverty bites in slums, but "the social and pastoral lifeline of small communities is extraordinary"

AFRICA/KENYA - Food and hope for those in need of slums: the intervention of the Church