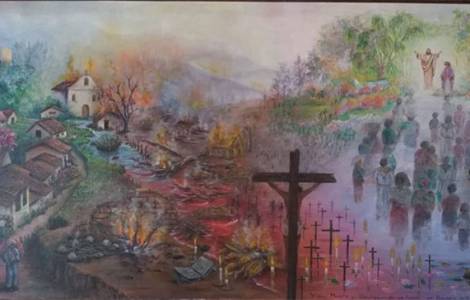 2022-01-10
Increasing violence and conflict in the department of Solola, the Bishops call for dialogue and prayer

2021-12-16
The Bishops: the second Christmas overshadowed by the pandemic leads us to appreciate the splendor of Christ who comes to enlighten the world

2021-06-09
The US Vice President Kamala Harris advises against emigration: Bishops are calling for solutions to structural causes

2021-05-19
The Bishops: safeguarding and defending the family is the responsibility of civil authorities, but also of each family

Guatemala City (Agenzia Fides) - On April 23, 2021 the celebrations for the beatification of ten martyrs of the Guatemalan diocese of Quiché will take place in Santa Cruz del Quiché. The bishops of Guatemala published a message on this occasion, in which they trace the history of this country batte in the blood of the martyrs, whom they describe as "faithful witnesses of God" and of his Gospel, committed to building the community and society according to the values of the Kingdom.
On January 23, 2020, Pope Francis confirmed the martyrdom of three priests and seven lay people, including a 12-year-old boy, who were killed in hatred of the faith between 1980 and 1991. They had dedicated themselves in the name of God to the poorest brothers and sisters at a time of persecution of the Church and violence against the entire population. They were preceded by hundreds of other known and unknown witnesses who fertilized this land with their blood (see Fides, 13/2/2020).
The three priests were Missionaries of the Sacred Heart of Jesus and all came from Spain. Father José María Gran Cirera was sent to Guatemala as a missionary in 1975, where he cared for the poor and indigenous people. He was murdered on June 4, 1980, along with the sacristan and catechist Domingo del Barrio Batz, who is also one of the new blessed, on their return from a visit to some villages. Father Faustino Villanueva Villanueva was sent to Guatemala as a missionary in 1959, where he performed pastoral duties in various parishes in the Diocese of Quiché. He was murdered on July 10, 1980. Father Juan Alonso Fernández was sent to Guatemala in 1960, the year of his ordination. From 1963 to 1965 he was a missionary in Indonesia. Back in Guatemala, he founded the community of S. Maria Regina in Lancetillo. He was tortured and murdered on February 15, 1981.
Together with them seven lay people will be beatified, in addition to Domingo del Barrio Batz, who was murdered together with Father Cirera, there is also the 12-year-old Juan Barrera Méndez, member of the Catholic Action; Tomás Ramírez Caba, married, sacristan; Nicolás Castro, catechist and extraordinary minister of Communion; Reyes Us Hernández, married and a member of the Church; Rosalío Benito, catechist and pastoral worker; Miguel Tiu Imul, married, director of Catholic Action and catechist.
In their message of March 21, the Bishops of Guatemala recall that "throughout the history of the Church, at different times and under different circumstances, men and women, faithful disciples of the Lord, have shed their blood. With the sacrifice of their own life they sealed the deepest convictions that animated their lives: they wanted, like Jesus, to give their existence for others and to share in their fate and to share this fate of persecution and death".
In Guatemala's recent history, four more martyrs were beatified in 2017, affirmed the bishops, who "shed their blood during the years of internal armed conflict because they were convinced that there is no greater love than giving one's life for others and, as Catholics, insisted on upholding the Kingdom of Heaven values proclaimed by the Lord Jesus: defense of human dignity, respect for life, social justice and protection of the weakest and most vulnerable".
"Today", said the Bishops about the upcoming celebrations, "the Lord offers us again the opportunity to praise and thank him, because on April 23rd we will witness the beatification of the martyrs of the diocese of Quiché". (SL) (Agenzia Fides, 24/3/2021)