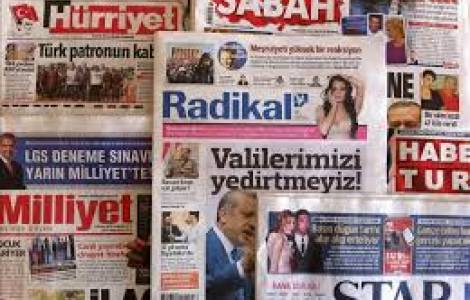 Ankara (Agenzia Fides) - The media in Turkey did not ignore Pope Francis' visit to neighboring Iraq. Very different comments and analyzes were published. In addition to reports on the possible contribution of the papal tour to the processes of regional pacification, there were also critical evaluations and articles that are shaped by prejudices regarding the nature of the Catholic Church and the role of the Holy See in regional and global crises.
One on March 8 published by the pro-government newspaper "Yeni Safak", questioned the role of the Vatican in managing crises and conflicts in the Middle East. The Holy See is charged with "passivity on sensitive issues such as "the Israeli occupation of Palestine or the limitation to "calls to prayer" during the 2003 invasion of Iraq. Pope Francis' visit to the United Arab Emirates has also been criticized, as this country is "involved in conflicts in many parts of the Middle East, from Somalia to Yemen, from Syria to Libya". It goes unmentioned that in many of these conflict scenarios there is the military involvement of Turkey, a country also visited by Pope Francis, as well as by Benedict XVI, John Paul II and Paul VI.
On March 8, the newspaper Hurriyet published a commentary on the Pope's visit to Iraq, in which the author wonders, "where was the Pope when there were the massacres in Iraq, when US planes dropped bombs on Baghdad, (...), and while Iraq was razed to the ground under the pretext of 'bringing them democracy'?" .
Professor Ozcan Gongur, of the University of Ankara, in an article entitled "The strategy of the Pope's visit to Iraq", covers "the objectives and results" of the papal journey in eight points, initially claiming the support of Christians is a priority with the aim of "Christianizing these regions". Even the visit of Pope Francis to the Great Ayatollah Ali al Sistani is reduced in the comment to a mere tactics aimed at "favoring" the intentions by increasing internal conflicts between the Shiites. The text also criticizes the Popes' alleged lack of sensitivity to the suffering of Muslim communities in the Middle East. Another article published by Hurryiet on March 7th sees the papal visit as aiming to strengthen the dialogue with Islam and support the Christian communities and in an effort to strengthen the "Catholic presence" in the region, according to the Turkish newspaper the influence of Moscow and the Russian Orthodox Church is increasing. Before the Pope's visit, Lütfullah Göktaş, Ankara Ambassador to the Holy See, praised the potential positive contribution of the Pope's trip to Iraq "to the stability of the region" in an interview published by the Turkish media and also introduced Turkey as "a country that emphasizes the importance of stability in the region on every occasion", while the CNN interviewed writer and analyst Lütfü Özşahin, drawing attention to interreligious dialogue as the focus of the papal visit, assumed that "one of the FETÖ bases is located in the Vatican". "FETÖ is the abbreviation for the organization of the Turkish Islamic preacher Fethullah Gulen, which Ankara regarded as the person behind the failed coup on July 15, 2016. (GV) (Agenzia Fides, 9/3/2021)