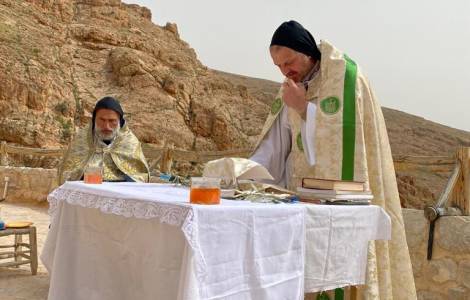 Nabek (Agenzia Fides) - "We must pray for this trip", said Father Jacques Mourad, a Syrian Catholic monk from the Deir Mar Musa community on the upcoming visit of Pope Francis to Iraq, "it is not just a trip to Christians from there or to a single country. It is a trip to the Middle East. We pray that it will help everyone - Sunnis, Shiites and Christians - to be sincere in dialogue". Father Mourad, a member of the monastic community founded by Roman Jesuit Paolo Dall'Oglio, was kidnapped in 2015 by jihadist militias of the self-proclaimed Islamic State (IS) who had held him hostage for many months. After his release, he lived for a long time in Sulaymanyia in the Iraqi province of Kurdistan and helped many Iraqi Christian refugees who had fled in the face of the advance of IS on Qaraqosh and other cities on the Nineveh Plain. His spiritual wisdom as a Syrian monk gives valuable insights to better understand the importance of the upcoming papal visit. "Pope Francis", Father Jacques repeated to Fides "comes to bring Jesus. He brings Jesus to everyone, not just Christians. Jesus is for everyone, not just for Christians. And the Pope brings the love of Jesus to everyone. Everyone can love Jesus and experience his unconditional and immoderate love. Everyone has the desire for Christ in their hearts".
In the context of the difficult situation in Iraq, where sectarianism fuels the fire of violence and rejection, according to Father Jacques, the miracle of reconciliation can also flourish from the martyrdom that marks the path of these churches: "I hope", confides Father Mourad "That the Pope goes down into the crypt of the Church of Perpetual Help, in Baghdad, the church of the Massacre. I hope that there he can pay tribute to the blood of the martyrs, but also thinks of their murderers. Starting from their blood, from the blood of the martyrs, one must endeavor to ensure that emerging emotions are not a pretext for reopening wounds, but to look also at the murderers and offer forgiveness to all, in the contemplation of their glory, of the glory of martyrs. This is the miracle that can happen and that we pray for in the light of the glory of Christ that goes out from within them. This is the miracle that could reopen many paths. It could bring out the desire for peace that is in everyone, in the midst of wounds and pain".
Pope Francis' visit to Iraq is also a unique opportunity for Father Mourad to highlight the unique vocation of the indigenous Christian communities in the Middle East: "The very mission of the Churches in our countries", remarks the Syrian monk "is their humble life and poverty among Muslims. In this way, we also cultivate the expectation that Jesus is present in Muslims. Without this mission, the presence of Christians in the Middle East may not make sense. Everything becomes difficult for Christians, and also for others, if Christians do not bear witness to the hope of Christ". Father Mourad does not consider political, economic or geopolitical support to be indispensable when it comes to enabling native Christians to stay in the parishes in the Middle East: "The only strength of Christians", Father Jacques repeated to Fides "is love Jesus and no other love to live, even to the cross. And Iraqi Christians have and continue to live their Christian testimony in extraordinary ways throughout the years of wars. Therefore, those who have participated in the mystery of Christ in this way have no other interests, they have no other words to add. In their everyday life they live the spirituality of the cross of Jesus that we received at our baptism". Precisely in the light of this participation in the mystery of salvation, the call to fraternity, which Pope Francis chose as the motto for his trip to Iraq, is not just an expression of a vague idealism: "Especially for us in the Middle East", said Father Jacques, "concentrating in the concept of fraternity encompasses all of Christian theology that we need not only to live every day but also to bear witness to our faith. When we Christians lose our vocation to witness, we also lose the feeling that we are here in the countries of the Middle East to live with our brothers and sisters. Jesus became man for this, and anything is possible for those he loves. He came to tell us that God is the source of our lives and we humans are God's people. Instead, this calling of all people to regard themselves as brothers and sisters is often denied when a country and a people are exposed to violence and war t is the work of the devil who wants to destroy what God loves". (GV) (Agenzia Fides, 4/3/2021)

AFRICA/NIGERIA - Hunger, insecurity, desertification will be at the center of the regional meeting of the Bishops of West Africa