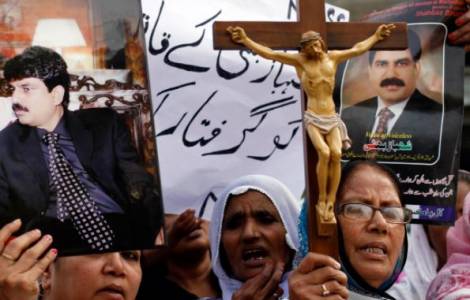 2021-04-12
Inauguration of the new Archbishop of Karachi: "I want to be a shepherd with the smell of sheep"

2021-03-25
Preach the Gospel of service, peace and development in the declarations of the new Apostolic Vicar of Quetta

Khushpur (Agenzia Fides) - A gathering of young people and a Solemn Mass celebrated in the birthplace of Catholic Minister Shahbaz Bhatti, Khushpur, in the province of Punjab, where he is also buried: this is how the Christian community in Pakistan commemorates and celebrates the tenth anniversary of the death of Catholic Minister for Religious Minorities. On March 2, 2011, Bhatti was killed in a terrorist attack in Islamabad. Today, Christians in Pakistan, together with other religious communities, remember the Pakistani Minister's legacy, while the demand for official recognition of his martyrdom is growing louder in Catholic communities.
Fr. Emmanuel Parvez, parish priest in Faisalabad, cousin and spiritual father of Bhatti, who celebrated the service in the forecourt in front of the parish church in the Catholic village of Kushpur, told Fides that "the figure of Bhatti is a precious source of inspiration for young people of Pakistan. His honesty, his passion, his moral strength, his faith nourished by charity and hope constitute a heritage which is up to us not to disperse and to make fruitful in today's social, political and religious framework in the nation". Bhatti intended to unite young Christians, Muslims and other religious minorities "by developing in all the awareness and pride of being citizens of Pakistan, hoping that everyone would give their best for the development and progress of Pakistan", explains Fr. Parvez.
Recalling the life of the Catholic leader, "spent for peace, love, truth, justice, the good of the country", Fr Parvez affirms that "in Pakistan we still need charismatic people like him, ready to give themselves to others and to promote the dignity of all human beings, in particular the poorest and most suffering, without any discrimination".
Shahbaz Bhtatti, the parish priest recalls, is committed to promoting education for all, especially for the benefit of discriminated and marginalized young people, such as Christians and Hindus. "So today, it is urgent to continue working in Pakistan in order to guarantee access to education, a right enshrined in the Pakistani Constitution. Only in this way will we succeed in overcoming the culture of violence and fanaticism".
Young Pakistanis today remember Bhatti as a "man of prayer and action, humble and tenacious, a man filled with the Holy Spirit, contemplative and active who gave his life to the end, for the good of Pakistan, always inspired by the life of Christ crucified. This is why we hope that the Church will be able to recognize his martyrdom", concludes Fr. Parvez. (PA) (Agenzia Fides, 2/3/2021)