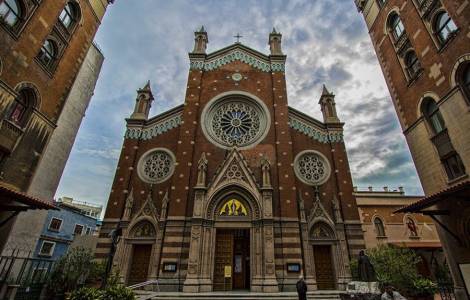 Istanbul (Agenzia Fides) - The Catholic Basilica of St. Anthony of Padua, located in the very central Istiklal Caddesi, one of the most famous avenues in Istanbul, is currently in no danger of ending up on the real estate market as a private luxury building. In recent days, Sebahattin Gök has been arrested and brought to justice, the man who last year, thanks to a network of accomplices, organized a complex fraudulent operation to illegally gain possession of the largest church Catholic Istanbul in order to resell it to the highest bidder. Investigations into the case confirmed that the "gang" of Gök and his associates were specializing in real estate scams committed against ecclesial and religious communities as well as foreign owners or those belonging to ethnic minority groups.
The first church built in the area currently occupied by the Basilica, was erected in 1725 by the Italian community of Istanbul. The current place of worship (in the photo), served by the Conventual Franciscans, was rebuilt in Venetian neo-Gothic style between 1906 and 1912. In accordance with the custom of the time, the property of the church was owned by members of the Italian royal family. In January 1971, the heirs of the royal family renounced the rights to the property, to the benefit of the Sent Antuan Kilisesi association (Church of St. Anthony) which depends on the local Catholic community.
In recent years, Sebahattin Gök had made several trips to Italy, France and the United States, collecting proxies and signing delegations from people whom he later presented as the rightful heirs to the original owners of the Basilica. Through these letters, and after having also accumulated dubious inheritance certificates from a justice of the peace, the Turkish businessman had presented himself to the land registry claiming the right to enter into possession of the place of worship on behalf of his legitimate owners. Last year, the Franciscan conventuals responsible for the church appealed to Turkish justice, obtaining a safeguard measure aimed at preserving the place of worship and the adjoining premises. In the course of the investigation, it emerged that the same network of accomplices linked to Gök had carried out a similar attempt to illegally take the Bulgarian church of Galata and other places of worship and buildings erected in the past by the local Armenian, French and Italian and Jewish communities, collecting 34 lawsuits brought against him for these attempts.
The arrest of S. Gök took place on the basis of charges of forgery in public writings aimed at aggravated swindle. The case raises in its own way the controversial question of the many churches and ecclesiastical goods scattered over Turkish territory and whose property titles have been lost over the centuries and which have ended up becoming, more or less legally, the property of individuals or have passed, including recently, to the heritage of the Turkish Ministry of the Treasury. (GV) (Agenzia Fides, 24/2/2021)