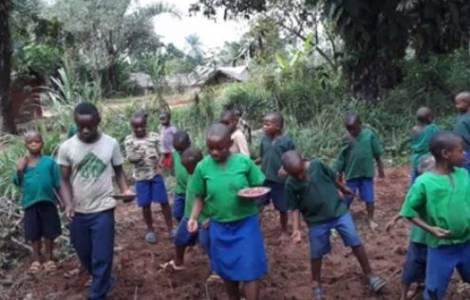 2021-02-27
After the fatal attack on the Italian Ambassador: More civilians are victims of massacres

2021-02-24
After the attack on the Italian ambassador: "The population has been suffering from terrorist attacks for years"

2021-02-23
Italian ambassador killed in kidnapping attempt: "He was very close to the missionaries"

Mungbere (Agenzia Fides) - "This project is a springboard so that the pygmies begin to be active subjects of the society in which they live. To date, we have built a college where students can stay for extended periods. We are also currently organizing a series of one-year training meetings on agricultural and livestock techniques". This is what Father Pierre Levati, a Togolese missionary, told Agenzia Fides, referring to the schooling project that the Comboni family has promoted to help the pygmy population of the Mungbere area, in the north-eastern part of the country.
Father Pierre, promoter of this initiative, says that "since the arrival of the first Comboni Fathers in Congo, in the 1960s, the commitment to these people was immediately to fight prejudices and ensure that the pygmies were no longer forced to live marginalized on the outskirsts of the forest. Within the framework of this pastoral care - remarks the missionari - there are many difficulties. The first is to identify them because it is not easy to find them in the forest. The second relates to the approach. Often, we wonder what their reaction might be in front of an individual who does not belong to their ethnic group. Another difficulty is the spoken language. For this, it is necessary to find a good interpreter in each village".
It was only in the last 20 years - says Father Levati - that a schooling, health and development program started directly involving the pygmies. "The percentage of Pygmy children and adolescents enrolled in schools is in fact still very low, especially in secondary school where they are almost absolutely absent. Everywhere, the illiteracy rate is over 97% and that of women is close to 99%". Beyond the fact of having to suffer a discriminatory attitude - continues the religious - other aggravating factors with regard to the process of school dropout are early marriages, alcoholism and drug addiction".
To cope with this situation, the Comboni Missionaries, thanks to fundraising, have built a college in the center of Mungbere which currently accomodates about 110 young people. "This structure - comments Father Pierre - although it was built for pygmy children leaves its doors open to children of the Bantu ethnic group, the other population present in this area in order to promote integration between them. Moreover - he continues - in the villages where the pygmy camps are located, we have created schools called 'ORA' (Observe, Reproduce and Assimilate). At the end of the school cycle, all students, before going to college, must take an entrance exam". The project also includes courses in cultivating fields and the breeding of livestock. "Especially young people will be involved, with the aim of reducing poverty, theft and vagrancy", explains Father Levati. "At the end of these paths - he concludes - participants will be given work tools for starting their activities". (ES) (Agenzia Fides, 20/2/2021)