ASIA/MYANMAR - Buddhist monks intervene in negotiations with the army 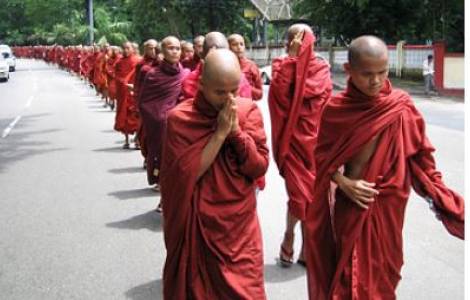 2021-02-22
Appeal of Catholic Bishops: peace and reconciliation through dialogue

Yangon (Agenzia Fides) - Bhamo Sayadaw Bhaddanta Kumara, the monk who represents the top of the Burmese Buddhist community (State Sangha Maha Nayaka Committee) officially asks for dialogue between the parties in order to put an end to the chaotic situation in which the country finds itself since the seizure of power by a military junta on February 1st. However Ha Na - the acronym by which elderly monks in Myanmar are known - once again publicly launched a proposal for negotiations - after sending a private letter to members of the junta. Receiving Wednesday the President and members of the Administrative Council of the Mandalay region at Buddhism University in Mandalay - the local press reported - Ma Ha Na Bhamo Sayadaw called on the parties "not to harbor grudges and not to seek the mutual destruction of each other, but to have love and empathy to negotiate a solution to the current crisis as quickly as possible. This - he said - for the dignity of Myanmar and Tatmadaw (the national army) and for the well-being of citizens, so that Myanmar is able to stand out on the global stage". The current situation - he added – calls for immediate negotiations between all the authorities and responsible persons, otherwise Myanmar "risks disappearing from the world map" because - he concluded - the responsibility of any violence, including arson, poisoning and the use of chemicals, will ultimately fall on those who rule the country.
Before the coup on January 29, Bhamo Sayadaw had already submitted a request, signed by 10 senior monks, urging the parties to resolve the issue of the November 8 ballot - in which the League victory of Aung San Suu Kyi had been challenged by the military - peacefully and in accordance with the law.
Later, a few days after the coup, a new request was sent to the State Administrative Council (the name the junta gave itself) asking that talks be held with the leaders of the deposed government, a request which was reiterated on February 10 by three senior monks to the general in charge of CAS, Min Aung Hlaing.
Meanwhile, yesterday, on the 14th day of protest, the streets were a little less crowded than in the previous days but only because of an alternation of moments that left the police and the army speechless. Sporadic episodes of violence have been reported - particularly in Myitkyina, the capital of the Kachin state - as the number of arrests continues to rise, now also affecting ordinary workers who have embraced the cause of peaceful civil disobedience. The country is at a standstill, the banks are closed and the foreign currency reserves are dwindling. The strikers are hiding so as not to be arrested while those who can, donate money to a fund to support families who join the protest movement now widespread across the country and in all sectors, from manufacturing to healthcare, from bureaucracy to transport.
Yesterday, February 19, there was also news of the death of the young student from Mandalay Ma Mya Thwet Thwet Khine, shot in the head by a bullet during protests in recent days in the second city of the country and since then in a coma. In the meantime, while the Singapore Ministry of Foreign Affairs has also taken a position, to the sanctions decided by the United States were added yesterday those taken by Canada and the United Kingdom, consisting in the freezing of the property of senior military authorities of Myanmar. (MG-PA) (Agenzia Fides, 20/2/2021)