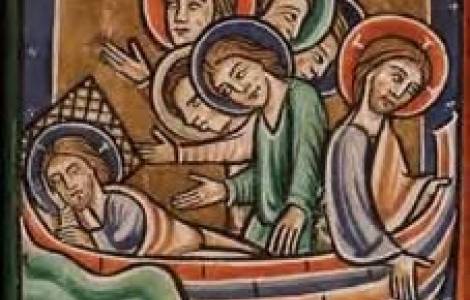 2021-04-09
Syriac Catholic Patriarch: Those who use sanctions as an instrument of political pressure starve the Syrian people

2021-03-04
Father Jacques Mourad on the Pope's trip to Iraq: "he comes to bring Jesus to everyone, not just to Christians"

Damascus (Agenzia Fides) - Destroyed by war and suffocated by economic sanctions, Syria is like a ship sinking in a storm. And to the disciples of Christ who are in Syria, in this state, the same anguished words come to mind that the Apostles addressed to Jesus, who was sleeping in the stern, while their boat was overwhelmed by the waves on Lake Tiberias. This is the comparison made by Samir Nassar, Maronite Archbishop of Damascus, in his Lent message, which begins on Monday, February 15, in the liturgical calendar of the Maronite Church.
"It seems that the war in Syria", reads the short text, sent to Agenzia Fides, "is the most cruel seen in the world since the 2nd World war. With the diminishment of violence an economic disaster has overtaken the people". The Maronite Archbishop cites dates that illustrate the dimensions of the Syrian tragedy and speaks of: "950,000 families living with death. More than 200,000 people have disappeared - among them 2 Bishops and 4 priests - and a nightmare for those parents and friends who do not know what has happened to their loved ones. 13,000,000 refugees from different areas who live in misery and uncertainty. 95,000 people with amputated hands and feet or paralysis living in a country which is unable to cope with these problemswhich are both psychological and medical. 2,500,000 dwellings damaged or destroyed; ruins everywhere like dead towns, which have become camps for refugees and the homeless.
The situation is such that the people are choked by blockades and sanctions, thus limiting the help they can receive from outside, rampant inflation and Covid-19 are doing the rest", added Archbishop Nassar. "Faced with these scenes of desolation - continues the message - little ones and the poor cry out to the Lord as they try to heal their wounds: "Master, don't you care that we are about to perish?" It is the same disturbing question the apostles ask Jesus in the Gospel of Mark when their boat is overwhelmed by the waves in the Sea of Galilee while he sleeps. The gospel story continues with Jesus who wakes up, calms the storm, and then asks his disciples, "Why are you so afraid? Do you still have no faith?"(Mk, 4:40) "In today's situation", Archbishop Nassar concludes, "the Church in Syria continues on her path and her work in the fields of health and education, accompanies and supports weakest families" and he emphasizes:"Even if the world forgets Syria, the Lord looks at us and does not let the boat sink". (GV) (Agenzia Fides, 12/2/2021)