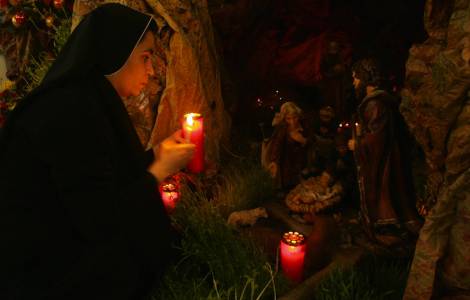 2021-10-28
Jerusalem, Israeli authorities block the cultural festival organized in the House of Abraham. The Heads of the Catholic Churches express deep concern

2021-09-02
Solar panels at the University of Bethlehem and in Catholic schools, to guard the "common home" and concentrate resources in educational activities

Gaza (Agenzia Fides) - The provision by which a department of the Ministry of Religious Affairs in the Gaza Strip, governed by the Palestinian Islamist party Hamas, has given instructions to Muslims to limit their "interaction" with Christian Christmas celebrations, continues to cause concern. The directives, contained in an internal document of the ministry, have been released by the Israeli media (Jeurusalem Post). Such provisions include a special fatwa (Islamic ordinance) and a mobilization campaign through the media and preachers to remind Muslims of the need to refrain from directly participating in non-Muslim rites and celebrations.
On the afternoon of Saturday, December 19, in an attempt to defuse the controversy, the Hamas-controlled ministry published a statement to clarify that the planned measures were not directed against the liturgical and devotional practices of Christians in Gaza, presented as "compatriots and comrades in the struggle for the Palestinian cause", but addressed exclusively to Muslims who participate in non-Islamic religious celebrations.
The ministry's statement, confirming the existence of the ministerial directive, had the effect of multiplying the negative reactions, even in the Palestinian field. Among the most outspoken critics of the Hamas measure is Father Ibrahim Faltas, an Egyptian friar of the Custody of the Holy Land, known for his closeness to the Palestinian people. Father Ibrahim has released a long articulated text, also published on the abouna.org website, in which he defines the ministerial declaration as "a black page" in the history of Hamas. "I would like to see energies mobilized to lift the blockade of Gaza, or to support reconciliation efforts between Fatah and Hamas and achieve unity among the Palestinian people, or at least to convince the people to help each other in these difficult circumstances", reads the text of Father Ibrahim, who blames the Islamist movement for trying to "prevent people from celebrating together the most beautiful holiday in Palestine, the holiday in which the attention of millions of people around the world is attracted to enthusiastically follow the details of this celebration in Bethlehem, the capital of the nativity, which becomes the capital of joy and joy in Palestine".
"Christmas" continues the Franciscan father, addressing the Hamas militants, "is it not the birthday of the Messenger of Love and Peace, Christ Jesus son of Mary, whom you honor as God's prophet, quoted twenty-five times in the Koran? And isn't the Virgin Mary mentioned thirty-four times in the Koran? Isn't Christmas the feast of Bethlehem, the day of Palestine? Isn't that the reason why millions of pilgrims come to Bethlehem every year, also becoming a source of income for Palestine and the Palestinian people?"
The Palestinian Democratic Union (Fida), a secular group within the PLO, has also stigmatized the Christmas directives issued by Hamas in the Gaza Strip, labeling them as an attack "on the values of tolerance and brotherhood that have so far prevailed among Palestinians". (GV) (Agenzia Fides, 21/12/2020)