ASIA/SYRIA - Monks and nuns of Deir Mar Musa, the love of Christ, source of healing for humanity wounded between war and pandemic 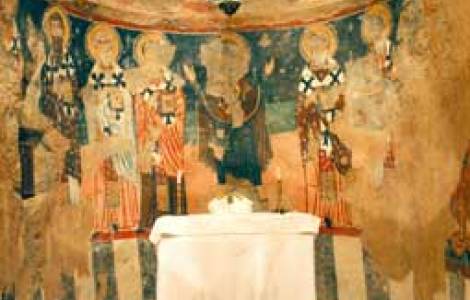 Nabek (Agenzia Fides) - "Sometimes, out of habit perhaps, we will say to God, “may your will be done”, but only rarely do we say, along with the leper, “if you wish”. Our moments of prayer are often full of ourselves, our thoughts, our concerns, rather than be full of the Lord, the moment, and His presence". This is how the Christmas letter sent to friends all over the world by the monks and nuns of Deir Mar Musa begins, the monastic community founded in Syria by the Roman Jesuit Paolo Dall'Oglio, who died in July 2013 while he was in Raqqa, at that time stronghold of the jihadist militias of the Islamic State (Daesh).
As every year, the letter traces a brief account of the joys and events that have marked the life of the members in the community in the last year, with a look of faith also at the tribulations, expectations and consolations that have marked the Middle Eastern peoples in 2020 - starting from the Syrian one - and of the whole human race. "Our world" writes in the introduction Sister Houda, who has led the community for the last three years, "is in urgent need of prayer, for this is the only anchor of salvation to prevent a catastrophic and destructive end to all that is beautiful as a result of the exploitation of nature and bad human relations.
The pandemic that has terrified people and caused so many victims - adds Sister Houda, introducing the first reference to the infection of Covid 19 - is just one of the results of the irresponsible approach we have had to the world and to nature. But the most dangerous pandemic - adds Sister Houda - is that which strikes souls and hearts, infecting our relationships with God and with others, in our communities, families, churches, and throughout the world". A disease that has so deeply afflicted our humanity "due to arrogance, self-sufficiency, and egocentricity". For those who have encountered the grace of Christ - the letter of the monks and nuns of Deir Mar Musa points out - "there is only one effective medicine: rehabilitation as disciples of Jesus and a return to genuine love for Him alone, a thaumaturgic love that heals and repairs the wounds of humankind and restores its primordial humanity".
The letter from the brothers and sisters of Deir Mar Moousa, among other things, contains the story of the return of Father Jacques Mourad to the monastery of Mar Elian, from where the Syrian monk was taken by a group of jihadist kidnappers in 2015: "In June, for the first time since returning free after his abduction, Brother Jacques went with Sister Deema and Brother Yause to visit the monastery of Mar Elian. The shock was an enormous one: all of the olive trees and other fruit trees, planted 20 years earlier, had been either uprooted or chopped down. These plants had made up an oasis that surrounded the monastery, where the inhabitants of Qaryatayn, Muslims and Christians, would come with their children to play happily. There are many obstacles that prevent work from being resumed in Qaryatayn, in particular, the small number of parishioners. Few of them, less than fifteen, of whom most single, have returned to the city. However, these few do form a concrete hope for the return of other Christians, who seek help and support from the Church for the restoration of their homes and to create work that will allow them to live dignified lives. From time to time, the Community goes to celebrate mass in the homes of the parishioners who are present there. On the 9th of September, we gathered together with the parish priest of Nabek and a discreet number of parishioners to celebrate the feast of Mar Elian".
The letter from the monks and nuns of Deir Mar Mousa also provides impressive details on the new sufferings and also on the contradictions regarding the present of the Syrian people: "The economic situation in Syria" reads the message "is getting worse and worse: last year a dollar was worth around 540 Syrian lire, while today it is worth almost 3000. Work is precarious for everyone, and one job is not enough to support a family even in a less than dignified way. Moreover, we suffer a lack of gas and a lack of diesel for heating and the operation of factories, including the bakeries; queuing to buy a bread ration can take half a day, while that for gasoline, on the other hand, can get, at certain times, to be miles long and last two nights of waiting in the car along the road to the gas station. Not to mention medicines and medical treatment: there are farmers who have to sell their land to keep their cancer-stricken son or mother die of cancer or because they have to do dialysis... etc. Despite this, however, there are those who can buy bread at the private bakeries, those who can buy diesel, gas, and petrol at insane prices without having to wait in humiliating lines, and if they get sick, they can go to luxury clinics which continue to do cosmetic surgeries as well". At the conclusion of the letter, the monks and nuns of Deir Mar Musa once again express their desire and hope to continue walking on the path they began to walk together with Father Paolo Dall'Oglio, their founder, despite the pain of his absence: "The horizon of friendship with Islam and with Muslims" reads the letter sent to friends and benefactors "is before our eyes and is present in our prayer; it is from there that Christ draws us to himself. And we, this little flock, have a small wish: that you may carry us in your prayers so that God may confirm us in our vocation and give us peace and unity always in Him". (GV) (Agenzia Fides, 14/12/2020)

AFRICA/EGYPT - Patriarch Tawadros II in a television interview: I suffer when I see the Church treated with neglect

EUROPE/ITALY - #PrayAgainstTrafficking: "Women play an important role in the fight against human trafficking"

AFRICA/BURKINA FASO - The Bishops: "We need to tackle the issue of internally displaced people to avoid new tensions"