AMERICA/PUERTO RICO - Elections: the Bishops praise the civic spirit of Puerto Ricans, the authorities need to listen to the request for change 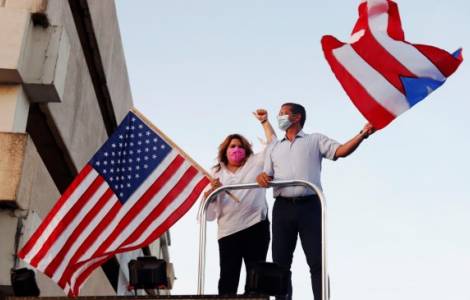 2021-10-07
The economic crisis threatens the collapse of electricity, for the Bishops it is about respect for the dignity of every human being

2021-08-27
Bishops express themselves unequivocally: Catholic moral teaching is not a pretext for opponents of vaccinations

2021-08-03
March against the imposition of gender ideology

San Juan (Agenzia Fides) - While the eyes of the world were on the elections in the United States on November 3rd, the same day the citizens of Puerto Rico also elected the governor, mayors and MPs for the next four years. In the Caribbean country, too, various political forces suspect alleged electoral fraud due to irregularities in the counting of votes.
A month after the election, the President of the State Electoral Commission, Francisco Rosado, blamed the People's Democratic Party (PPD) and the Victory Citizens' Movement (MVC) for the delay in counting votes, which resulted in the current situation for which today an official winner cannot be confirmed.
According to the preliminary result of the State Electoral Commission of Puerto Rico, the official candidate Pedro Pierluisi, of the conservative Partido Nuevo Progresista (PNP), won the governor's election with 32.9% of the vote, with his opponent Carlos Delgado, of the People's Democratic Party (PPD, center-right), which obtained 31.5% of the votes. The difference between the two was less than 17,000 votes.
The Bishops' Conference of Puerto Rico expressed itself in a "message at the end of the elections" in which it thanked the population for their peaceful participation and the great civic spirit, but at the same time denounces the unwillingness of the authorities to the desire of the population for change.
"First of all, we thank God and the spirit of civilization of our Puerto Rican people because, even when there have been dramatic changes in some election results, we have not had any violent incidents or social unrest during the elections" the text begins.
"We reaffirm, however, that the problems persist and the lack of consensus in the procedures that the new electoral law has allowed, have led to malfunctions in the bodies that regulate the elections", the Bishops denounce.
"We all agree that our people have expressed the desire to change the style and proposals of politics. There is a growing rejection of the hegemony of a party, new political forces are breaking into public scenarios, there is great discontent in the world regarding corruption and it is becoming clear that there will be no effective government unless a process of sincere, lasting and broad dialogue is initiated", the bishops' statement continued.
According to the Christian perspective, the Bishops call for "radical solutions to current practices that generate economic and social inequality in our country". They reject traces of colonialism, corruption, a government based on dependence, the practices of patronage and nepotism, the lack of control within agenzie. "All this ultimately leads our citizens further impoverished, especially the weakest, the retired and the unemployed. "
"May the birth of the Divine Child at Christmas fill us with light and wisdom to face the great challenges and commitments that history brings us, personally and collectively", the bishops concluded in their message signed on December 3rd. (CE) (Agenzia Fides, 7/12/2020)