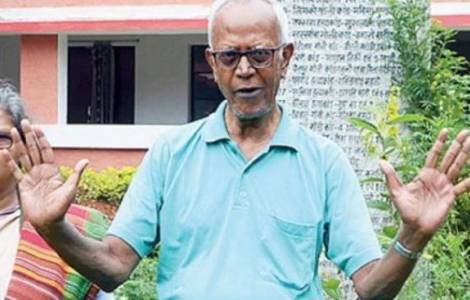 Dhaka (Agenzia Fides) - Christians in Bangladesh unite with the baptized in India to demand from the Indian government the immediate release of Father Stan Lourduswamy SJ, arrested in India for alleged complicity with Maoist rebel groups and accused of sedition (see Fides, 9/10, 20/10 and 26/10/2020). As Fides learned, the "Bangladesh Christian Association" (BCA) has written an official letter to Indian Prime Minister Narendra Modi, asking for "the immediate release of Father Stan Swamy".
The letter sent to Fides, signed by the president of the BCA, Nirmol Rozario, states: "We, the Christian community of Bangladesh, are seriously concerned about the detention of Father Stan Swamy, SJ in India. On 8 October 2020, 83-year-old father Stan Swamy, SJ, was arrested by the National Investigation Agency (NIA) in Ranchi, India. He is now in Talaja Central Prison,, Mumbai. Father Stan Swamy has been a tireless defender of human rights and has worked all his life for the poor, the Dalits, the tribals and the marginalized, following the example of Jesus Christ who came to preach the Good News to the poor, to proclaim the release of prisoners and the restoration of sight to the blind, to give freedom to those who are oppressed, to proclaim the Year of the Lord's grace (Lk 4: 18-19)".
In the letter, the Bangladeshi Christians express their alarm regarding Father Stan's physical condition: "Considering Father Stan Swamy's age and physical condition, it is a brutal act to keep him in prison while he is fully willing to cooperate in further investigations. Therefore, we, members of the Christian Association of Bangladesh, ask to intervene and to release Father Stan Swamy, SJ, thus restoring respect for human rights as a priority for the nation". The leaders of the BCA inform that they want to conduct a peaceful demonstration in Dhaka for the release of Father Stan Swamy, recalling that, given the age and the absurdity of the accusations brought against him, the government should immediately release him.
Recently, a delegation from the Bangladesh Christian Association, led by Nirmol Rozario, met with the High Commissioner of India in Bangladesh, Vikram Doraiswamy, speaking out on the cause of the urgent release of Fr. Stan. (FC-PA) (Agenzia Fides, 3/12/2020)

EUROPE/ITALY - The murderer of Fr. Roberto Malgesini, "the priest of the last", sentenced to life imprisonment