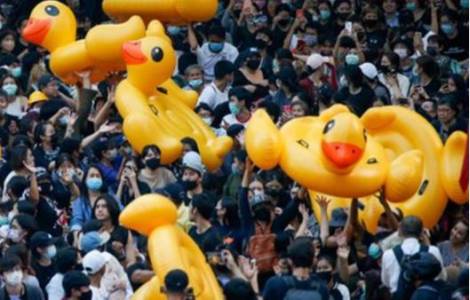 2021-03-01
10th Anniversary of the presence of the Xaverian missionaries at the service of the poor and the last, "by witnessing the Gospel of Jesus"

2021-02-25
Missionaries and small Catholic communities in the village of Papae, a bath of humanity and spirituality

Bangkok (Agenzia Fides) - The student movement is launching yet another challenge to Prime Minister Prayut Chan-o-Cha. The young demonstrators who, since last February, have been calling for the resignation of its government, a reform of the Constitution and the reorganization of the king's power, met yesterday, November 27, in the heart of Bangkok. To the now ritualistic yellow plastic ducks, which appear at every demonstration, to symbolize the mockery of the police fire hydrants, images of the various coups that have crossed the history of Thailand have been added, to indicate the demand for democracy and the refusal of a military intervention. So far, apart from a few sporadic cases, there has been no widespread violence. Observers recorded a police reaction against the demonstrators on November 17. Thirteen human rights organizations - such as Amnesty International, Human Rights Watch, Asia Democracy Network and Asian Forum for Human Rights and Development - wrote to the government stigmatizing violence against unarmed and peaceful young people. Police replied that the use of fire hydrants was necessary to prevent demonstrators, mostly high school and university students, from accessing some sensitive and institutional places.
The movement also began to contest the privileges of the Crown. On 25 November the Free Youth movement marched to the headquarters of the Crown Property Bureau, the office that manages the assets owned by the crown and which since 2017, by direct will of the king, is under its control: the choice of Rama X, who ascended the throne in 2016 following the death of his father Bhumibol Adulyadej (Rama IX), was endorsed by Prayut but many Thais did not like it. The police had surrounded the building with barbed wire barriers and seemed ready to defend it by any means: Prayut had anticipated that, in the face of acts of violence, the government would however use all the laws of the kingdom to contain the protest. The demonstrators then decided to change their objective, moving in front of the headquarters of the Siam Commercial Bank (SCB), in Chatuchak district, ending the demonstration shortly after 9 pm. The choice of the bank was symbolic, given that the Crown Property Bureau is one of the main shareholders of the SCB.
The demonstration yesterday, November 27, was then to symbolize the protest against possible coups: this eventuality was also rejected before the meeting by the head of the Armed Forces General Narongphan Jitkaewtae.
If the reaction of the police so far has always been relatively calm, the Prime Minister mentioned the well-known law concerning the defamation of the monarchy (lese majesty), a very serious crime for which one risks, even for just one sentence, a punishment of 15 years in prison. Over ten protest leaders were questioned by the police precisely on the basis of Article 112 of the Criminal Code which punishes those who offend the royal house: there is the possibility that this will lead to an indictment or a conviction. The fear is that the law will be applied in a widespread manner, even if only to warn those who take to the streets, in a country where the monarchy actually enjoys a legislative system of protection that has no equal in the world.
A new demonstration is also scheduled for today, November 28, and another tomorrow, November 29: with the inevitable yellow ducks and other playful representations that are now constant symbols of every gathering. (MG-PA) (Agenzia Fides, 28/11/2020)