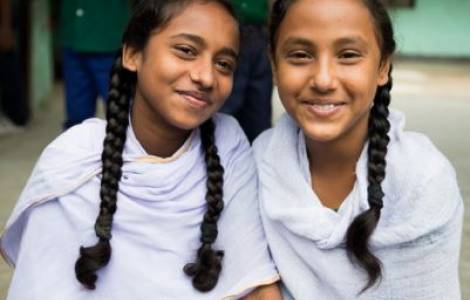 2020-12-17
The Islamic-Christian movement "Silsilah": Advent and Christmas, time of mercy

2020-12-14
In times of pandemic, "preaching and bearing witness to the Gospel are particularly important"

Manila (Agenzia Fides) - "Child marriage is a sad reality that dehumanizes, exploits and abuses girls. We welcome the new bill banning child marriages in the Philippines, praising its timely approval": said Bishop Rex Andrew Alarcon, at the head of the diocese of Daet and President of the Episcopal Youth Commission, during the debate at Parliament and the pssing of the bill that bans marriages with minors in the country.
The Senators unanimously approved Bill No. 1373, called the "Girls not Brides Act" which prohibits marriage before the age of 18 and regulates gender equality. The Senate also finally approved the bill in its third and final reading on November 9th.
"I am delighted to note the determination of lawmakers to protect children and their dignity. Society has a duty to protect its most vulnerable children from those who exploit them", said the Bishop. "The law is a way to also safeguard the sanctity of marriage and the family", the Bishop noted, noting that "marriage and the formation of a family are serious responsibilities".
Mgr. Alarcon, explained: "The desire to protect children, boys and girls, their dignity and their rights and the goal of safeguarding marriage and the family, are crucial and necessary elements for the authentic and harmonious development of society" .
"Today we give our girls the opportunity to dream and shape their future according to their wishes. We defend their right to education so that they can decide as adults when they are ready to start a family", said MP Rosa Hontiveros, after the Senate approved the bill. The Philippines, according to the politician, is in twelfth place in the world for child marriage with an estimated 726,000 girls.
According to government data, one in six girls in the Philippines gets married before reaching the age of 18. Child marriage occurs for many reasons, such as cultural traditions in some communities, poverty and lack of education. Early marriage also carries risks for so-called "mother-children", with a negative impact on the child's health and survival. Furthermore, many girls drop out of school because they have to look after a family by the age of 10 or 11.
Irish Catholic missionary Fr. Shay Cullen, director of the "Preda" Foundation, which works for the protection of children's rights in the Philippines, points out another alarming aspect to Fides: "In the Philippines, often the so-called 'marriage union' is only a means to justify pedophilia ; girls are used as sex slaves, abused by adult partners who often pay their families of origin. Very few denounce child sexual abuse. These alleged marriages are only used to cover up the crime of pedophilia. Hopefully this law will help eradicate this cancer". (SD-PA) (Agenzia Fides, 18/11/2020)

ASIA/KAZAKHSTAN - Family Christmas at the Ark Village, but generosity does not decrease