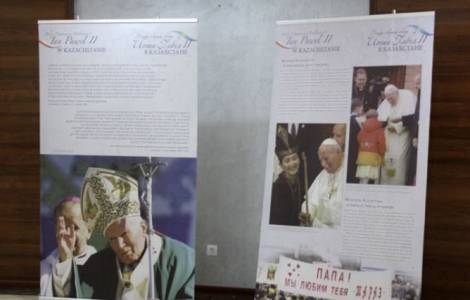 Nursultan (Agenzia Fides) - "John Paul II was an incomparable religious leader and a tireless advocate of dialogue between peoples, religions, cultures and civilizations. The importance of dialogue was one of the main reasons for John Paul II's historic visit to Kazakhstan, which he described as 'a country open to encounter and dialogue'. Furthermore, the Polish Pope was never tired of emphasizing the constructive and edifying role of dialogue, which religion should develop in a coherent and convincing way in society, by committing to the formation of human conscience, teaching mutual respect and imparting tolerance towards other peoples, cultures and religious denominations. This noble message was also underlined during his historic visit to Kazakhstan, the first Central Asian country visited by the Pope, and was immediately welcomed by the First President of the country, who decided in 2003 to establish the well-known Congress of Leaders of traditional and World Religions.
The Congress is held every three years in the capital of Kazakhstan, and concretizes the precious and daring vision of John Paul II, who praised Kazakhstan as a 'bridge between East and West, and a meeting place for different civilizations and different religious denominations with deep spiritual roots", said the Apostolic Nuncio of Kazakhstan, Archbishop Francis Assisi Chullikatt, who spoke of the importance of Saint John Paul II as a figure who inspires the ecumenical path of the Central Asian country, on the occasion of the opening of the photo exhibition "John Paul II - Pope of Dialogue" held in Nursultan, the Kazakh capital, in collaboration with the Polish Embassy, to celebrate the centenary of the birth of Karol Wojtyla.
In his address, the Apostolic Nuncio underlined how John Paul II "tirelessly embodied his mission as a prophet of dialogue through the testimony of generous service and exceptional altruism for the good of all humanity. Through his pilgrimages on the streets of this world, he showed us that through dialogue we can always and everywhere reach our neighbor, by stretching out our hand in the sign of friendship, in a loving gesture of love, understanding and mutual concern" .
The relationship between Pope Wojtyla and Kazakhstan has a historic date. On October 17, 1992, John Paul II founded the Apostolic Nunciature of the Kazakh state with the bull "Partes Nostras". The date marked the beginning of a journey of getting to know each other and working together. Evidence of this are the three official visits by former President Nursultan Nazarbayev to the Vatican (1998, 2003 and 2009), but above all the visit of John Paul II to Kazakhstan in September 2001.
Therefore, explained Mgr. Chullikatt, on the occasion of the centenary of the birth of John Paul II and on the eve of the twentieth anniversary of his visit to Kazakhstan, "we sincerely thank Poland for the great gift of St. John Paul II, who taught us the need to feel that we are all brothers in the arms of God, the greatest good of every human being".
The mutual relations between the Holy See and the Kazakh government received further impetus last October, when the Pontifical Council for Interreligious Dialogue and the " N. Nazarbayev Center for Development of Interfaith and Intercivilization Dialogue (NJSC) signed a Memorandum of Understanding with the aim of opening "new opportunities and more promising ways to implement common projects, to promote respect and knowledge among the representatives of the various religions".
Different nationalities and religious denominations live side by side in Kazakhstan: According to official information from the Kazakh Foreign Ministry, 70% of the 17 million inhabitants are Muslim, about 26% Christian, of whom 1% are Catholics. (LF-PA) (Agenzia Fides, 18/11/2020) 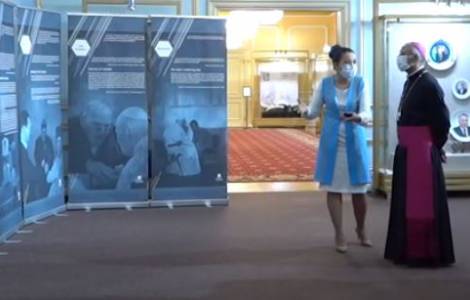