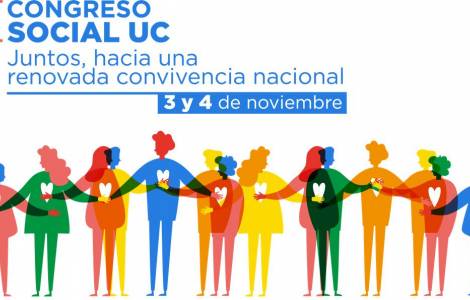 Santiago (Agenzia Fides) - After the national referendum of 25 October, in which the proposal to modify the Constitution won (see Fides 27/10/2020), the V Social Congress is being held on the theme "Together towards a renewed national coexistence". The Pontificia Universidad Católica de Chile, with the collaboration of the UC Center for Public Policies and the Archdiocese of Santiago, invited various representatives of the country's public, social and private sectors to face the challenges of Chilean society in the short, medium and long term and who want to contribute to the development of a renewed national coexistence in the light of the Church's social teaching. The social congress takes place on November 3rd and 4th in virtual form and is divided in four round tables, with the participation of various authoritative speakers.
According to the press release sent to Agenzia Fides the debate on the subject “Dialogues that generate encounters” is intended to deal with the contribution of the various components to building the common good. In the discussion about “facing the culture of waste”, the intrinsic value of society should be promoted in order to overcome the culture of waste. “The person at the center of development” is the motto of the panel discussion on integral development for all in the current context. The debate on “Renewed Institutions under the Sign of Service” focuses on the role of institutions in social relations, analyzing the current situation and asking how trust in the institutions can be restored.
The Education Commissioner of the Archdiocese of Santiago, Fr. Andrés Moro, emphasizes that a renewed national coexistence requires "respect, justice, solidarity, empathy and above all affection and appreciation of each person as a human being who was created with his dignity in the image of God, which is why we are all brothers and sisters”.
“In order to build our society, in which the person is at the center of development, we need to promote solidarity both intragenerational and intergenerational. And of course that has to do with the State, which is responsible for it as a public institution, but this also happens primarily through the family, through family networks”, highlighted sociologist Eugenio Tironi.
Benjamín Cruz, Head of the UC Department of Christian Pastoral Care and Culture, argues that “this year the V Social Congress wants to make us aware of what we are experiencing in Chile and in the world. We have seen that our society is very polarized, so we wanted to encourage encounters so that different people and institutions can talk about issues that are important for our country, such as the common good, the culture of waste and trust in institutions and respect for dignity the person. We are sure that dialogue and encounter are the ways to build the Chile we dream of.
From that perspective, we see in this congress an opportunity to contribute to the country with a Christian perspective, to identify the challenges and to make proposals based on values and our identity”. (SL) (Agenzia Fides, 4/11/2020)