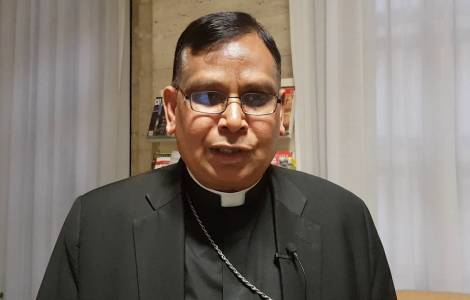 Karachi (Agenzia Fides) - Following the recent kidnapping, forced marriage and conversion of 13-year-old Arzoo in Karachi, the National Justice and Peace Commission (NCJP) expresses its regret at the growing intolerance in the country. Forced conversion has become an important tool in the persecution of Christians and Hindus in Pakistan, the commission said, (see Fides 21, 22, 24, 29/10/2020).
According to Church and official government (NADRA) documents, Arzoo is 13 years old and a 6th grade student. Her kidnapper forced her to marry him and convert to Islam. Arzoo's parents contested the validity of the marriage and appealed to the High Court of Sindh Karachi for the return of their daughter. On October 27, 2020, the kidnapper, together with his supporters, filed a petition to the High Court. The court order issued by the Sindh Karachi High Court in favor of the kidnapper, stated that Arzoo Raja accepted Islam and voluntarily married Ali Azhar. The court also ordered that no arrests be made in this case.
The National Commission for Justice and Peace (NCJP) strongly condemns this act of injustice. In a joint statement sent to Agenzia Fides, Archbishop Joseph Arshad, President of the NCJP, and Rev. Fr Emmanuel Yousaf (Mani), National Director of the NCJP, said: "Unfortunately, Pakistani society has become increasingly intolerant, and life as a religious minority is becoming extremely difficult. Arzoo's case has been reported, while there are many of these incidents that go unreported. Arzoo's family provided a birth certificate stating that the girl is 13 years old and that her marriage to Azhar violates the Sindh Child Marriage Restraint Act". The case has shaken the entire Christian community in Pakistan, the statement said.
Archbishop Joseph Arshad, Bishop of Islamabad/Rawalpindi, President of the Bishops' Conference of Pakistan and President of the NCJP says that "forced conversions are too easily and too often covered up by supposedly voluntary conversions, which puts underage girls at particular risk". He asked the government to ensure that justice is guaranteed in the case of Arzoo and that such incidents do not recur. "It is the responsibility of the State to enact laws to protect its citizens, especially minors", he said.
The horrible reality of forced conversions is that they are not seen as a crime, much less a problem that should concern the majority in Pakistan. We cannot allow our underage girls to be taken away from us, forcibly converted and get married. A bill against forced conversions was introduced in the Sindh Provincial Assembly in 2016, but has not yet been approved. The government must work to safeguard the rights of religious minorities in Pakistan as enshrined in our constitution", he concludes. (SL) (Agenzia Fides, 30/10/2020)