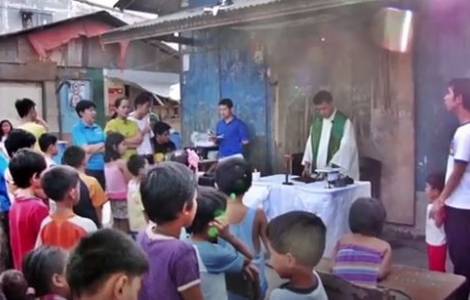 2021-07-28
Bishops' appeal to President Duterte: "Unity must be restored in the nation"

2021-07-21
Participating in the political life of the nation and "choosing a leader who embodies the example of Jesus": the invitation of the Bishops

2021-07-05
Life of faith in the family: the lay movement "Couples for Christ" celebrates its 40th anniversary

Manila (Agenzia Fides) - "In San Pedro, where our house was built, there was a mountain of garbage, but around the landfill there were the houses where the poor who work with garbage live. They are the 'scavengers', the diggers. They are all people who work with garbage: men, women and children who rummage through the waste to find materials to resell in order to survive. The living conditions in this area are very bad: malnourished children, appalling hygienic conditions. This is where our mission was born": this is what Fr. Ronald Diaz Ignacio, of the Missionary "Servants of the Poor", also known as "Morsel of the Poor", a male religious institute whose members are popularly called Cusmanians, after their founder, Blessed Giacomo Cusmano (1834-1888) Italian priest.
In an interview with Fides, the religious continues: "When I arrived in the Philippines in 1998, we began to follow the orphans and set up the "Blessed J. Cusmano formation house" the future Missionary Servants of the Poor, in San Pedro, south of Mereo Manila.
While living in that area, we became aware of the existence of these needy people and we understood that around San Pedro, the Lord had put us in front of a mission site. This is how the village called 'The village of happiness' was born, where we tried to improve the living conditions of those poor people, the last of the last, the forgotten by everything and everyone".
"They are poor people who hide, We must discover them. They are even ashamed to go to Mass because of their condition of poverty. It is a joy to share their poverty, it is a joy to know them, and it is a joy to do something to alleviate their suffering", he adds.
It is one of the works that the Servants of the Poor who in the Philippines follow their charism by dedicating themselves to works of charity towards the poorest and most vulnerable, carrying out their apostolate in centres for beggars, in orphanages and hospitals.
Besides being present in Italy, the Servants of the Poor are also present in Africa (Democratic Republic of Congo, Uganda), in the Americas (Brazil, Mexico) and in Asia (Philippines, India).
The Congregation of Missionary Servants of the Poor was founded in Palermo in 1887 by Father Giacomo Cusmano, beatified by Pope John Paul II in 1983.
In 2017 the Cusmanians celebrated one hundred and fifty years since the establishment of the "Morsel of the Poor", a practice founded by Blessed Giacomo Cusmano in 1867, which consisted in sharing a part of the daily meal from the plate of many people and families, in order to give food to the poorest.
Today the Cusmanian Family includes nuns, missionaries and friars "Servants of the Poor", but also members of the "Giacomo Cusmano" Italia Onlus Association, thousands of volunteers, former students. Their motto, for 150 years, has always been the same: sharing. (MI-PA) (Agenzia Fides, 28/10/2020)

ASIA/VIETNAM - Support for the poor and the sick: the Church deeply involved in charity actions for the pandemic

ASIA/VIETNAM - Support for the poor and the sick: the Church deeply involved in charity actions for the pandemic

AMERICA/COLOMBIA - Violence in Antioquia: religious communities ask to respect the right to peace

EUROPE/ITALY - The mission of the Friars Minor in the world: "Living the Gospel in fraternal communion, building bridges of dialogue among all peoples"

AFRICA/NIGER - "Women pray that the sun never goes down, because jihadists attack during the night"

ASIA/VIETNAM - Thirty-four new priests from the diocese of Vinh, who will also be 'fidei donum' missionaries in other territories