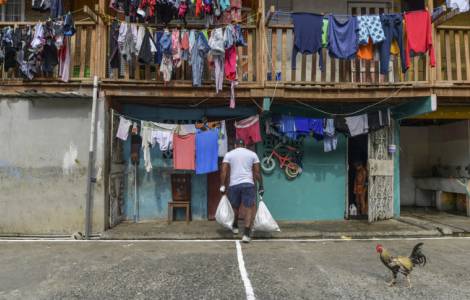 Vatican City (Agenzia Fides) - In this time of the Covid-19 pandemic, the Church in India has reached and provided assistance to several million people, especially the poorest and those in vulnerable conditions. Indian Christians have responded with generosity and commitment to the emergency, despite their number - 2.5% out of a population of 1,298,041,000 inhabitants. As elsewhere in the world, the lockdown imposed to contain the spread of the virus has resulted in the loss of jobs and minimal livelihoods for a large number of workers, immigrants and the poor, who have suffered the most. Thousands of immigrants found themselves stranded unexpectedly in different areas of the country where they found themselves without food or shelter. Parishes and religious communities have mobilized to collect donations and funds to be distributed, through daily meals and essential goods, to thousands of people, entire families, the elderly, the poor, the sick, tribal populations, immigrants, street children, the homeless and vulnerable people.
The long period of the pandemic has meant an extraordinary action for the local Churches in India and dealing with an unpredictable situation. The generosity and commitment of the Catholic communities were manifested towards all, without discrimination, but also led to the depletion of the meager economic resources at their disposal for the development of their ordinary activities of evangelization, assistance and human promotion. Through the Emergency Fund established by Pope Francis at the Pontifical Mission Societies (PMS) in order to respond to the needs caused by the Covid-19 emergency within the Churches of the mission territories (see Fides 6/4/2020), it was possible to help Dioceses and Parishes which have particular needs.
The latest aid from the PMS Emergency Fund was sent to various ecclesiastical districts in India: to the diocese of Daltonganj to contribute to the purchase and distribution of kits for children and the current expenses of 23 parishes; to the Diocese of Khunti for formation activities, meetings and seminars; to the Diocese of Jalpaiguri for online formation; to the Diocese of Baruipur to support the most needy and vulnerable families; to the Archdiocese of Patna and the Diocese of Kohima to address the different needs to face the various needs that have arisen as a result of the pandemic; to the Diocese of Purnea to support educational activities; to the Diocese of Aizawl for the vocational training of young people from tribal populations.
Latin America has also been plagued by the pandemic for some time and the local Churches are now at the end of their rope after having sought to alleviate the suffering of so many people for such a long period. Unfortunately, even before the spread of Covid-19, in many countries, precariousness was ordinary as was the lack of health and reception facilities, so the effects of the precautionary measures adopted further worsened the situation. In Panama, the Emergency Fund of the PMS sent aid to the Diocese of Colon-Kuna Yala and to the Territorial Prelature of Bocas del Toro to contribute to their needs following the effects of Covid-19. The same dramatic situation is also being experienced in Honduras. The aid sent to the Diocese of La Ceiba will be used to support parishes, now deprived of resources, as well as priests, and the formation of religious and lay people. The subsidies sent by the PMS Fund to the Diocese of Trujillo will be used to support 1000 families in 4 communities. (SL) (Agenzia Fides, 19/10/2020)