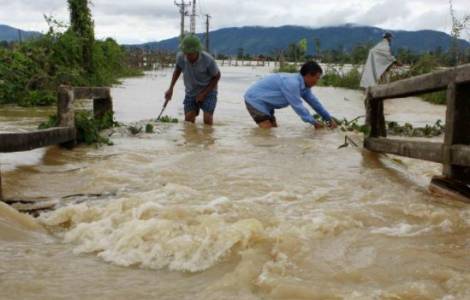 2021-01-18
Resignation and appointment of bishop of Xuân Lôc, Viêt Nam

Hanoi (Agenzia Fides) - Catholic Parishes and communities have mobilized to help people affected by the recent floods in central Vietnam, where due to heavy rains and floods, tens of thousands of residents have had to leave their homes in the past week. "People in central Vietnam are suffering and struggling to survive. We need to help each other and show solidarity with those who are in difficulty.
We are organizing immediate aid such as food, water and other provisions for their survival and safety", said Father Tran Duc Dien from Dien Sanh parish in Quang Tri. Most of the villages in the province are submerged and flooded. "We ask all people of good will to reach out to those people who are struggling with the floods", he said, appealing for the provision of humanitarian aid from Catholic communities and of all citizens.
"Many faithful have mobilized to help the poor in the central region, who suffer from hunger and are in difficulty and precariousness. We do it with all our heart, as an expression of Christian charity", said Father Nguyen Phuc, from the parish of Tan Luong, in Hai Chanh municipality, Quang Tri province.
As Fides learns, Bishop Paul Nguyen Thai Hop, at the head of the diocese of Hà Tinh, recently visited some of the areas affected by the floods, bringing relief, solidarity and comfort to the displaced. Caritas Viet Nam, the "Ha Tinh Catholic Business Association" and other religious organizations have stepped up their efforts to help those affected.
In the central Vietnam region, entire villages in the province of Quang Tri and Quang Nam are submerged by the floods, which have also reduced the food supplies of thousands of residents. More than 50,000 IDPs have been transferred to higher ground, the Vietnamese Disaster Management Authority said. More than 109,000 homes and 584 hectares of crops have been damaged as roads and bridges have been destroyed. According to authorities, the situation could worsen as another tropical storm, called Linfa, is expected to bring a new cycle of heavy rains.
Vietnam is prone to destructive storms that result in floods and landslides, with central coastal areas being the most vulnerable. Natural disasters - mostly floods and landslides caused by storms - killed 132 people and injured 207 others in the country last year. The country often experiences harsh weather during the rainy season between June and November. (SD-PA) (Agenzia Fides, 15/10/2020)

AMERICA/VENEZUELA - Medicine to save lives: guaranteeing everyone the right to health and access to medicines