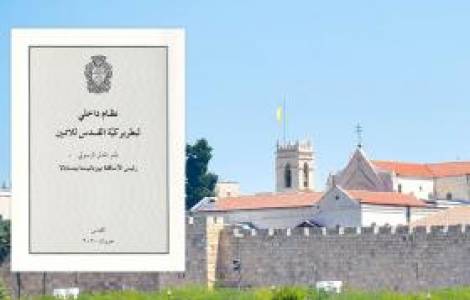 2020-12-18
Heads of the Churches of Jerusalem: at Christmas let us rejoice in God's gift for us, in these difficult times

2020-10-29
Bethlehem: Christians and Muslims together against Mohammed cartoons

Jerusalem (Agenzia Fides) - An easily understandable and uniform instrument for regulating the "internal affairs" of the Latin Patriarchate of Jerusalem, is intended to bring the administration of the various institutions of the Patriarchate in line with canon law and the latest regulations of the Holy See. With this in mind, the first "Statute of the Latin Patriarchate of Jerusalem" was conceived and created, the result of the restructuring of the institutions of the patriarchate initiated in 2016 by Archbishop Pierbattista Pizzaballa, Apostolic Administrator of the Patriarchate. The Statute is divided into three sections and, as Archbishop Pizzaballa explains in the introduction letter signed on June 4, 2020, contains clear and unambiguous provisions on the spiritual, pastoral and economic dimensions of the patriarchate. The new instrument also aims at organically reorganizing the provisions introduced by the various patriarchs over time and adapting them to the current legal and canonical framework that governs the functioning of Catholic ecclesiastical institutions. After an introduction on the identity and mission of the Patriarchate - reports abouna.org website - the Statute defines the duties and tasks of the Patriarch, the Bishops and priests, collaborators, advisory councils and ecclesiastical courts. Specific sub-sections are also dedicated to the functioning of institutions related to the Patriarchate, such as the Patriarchal Seminary of Beit Jala and the patriarchal schools. Particular care is taken in giving indications on the transparency and economic-financial sustainability of all the individual realities and activities placed under the control of the Patriarchate - parishes, schools, universities, welfare centers.
Already in June 2018 (see Fides, 20/6/2018), Archbishop Pierbattista Pizzaballa had established an Economic Council as an advisory body in charge of assisting the Patriarchate in the management of financial, economic and administrative matters. The Council, called to meet in plenary session several times a year, is constituted, besides the Patriarch (or the Apostolic Administrator) and the Patriarch's treasurer, also by six lay members (three from Jordan, one from Israel, one from Jerusalem and one from Palestine), all experts in the economic-financial sector.
In recent years, the Latin Patriarchate of Jerusalem has had to take on the administrative and financial problems that had marked the construction and launch of the American University of Madaba (AUM), the university linked to the Patriarchate and inaugurated on May 30, 2013 in the presence of King Abdallah II of Jordan. In the Letter addressed to all the members of the Latin Patriarchate at the beginning of Lent 2017, Archbishop Pizzaballa had written among other things that in the recent past "mistakes and wrong decisions have been made which have affected the life of the Patriarchate, financially and administratively, mainly concerning the American University of Madaba. We had failed in some important areas, perhaps not focused enough on our primary mission: preaching the Gospel and dedicate ourselves to the pastoral activities". (GV) (Agenzia Fides, 29/9/2020)