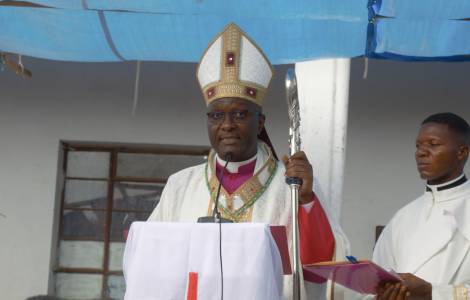 Kabinda (Agenzia Fides) - "The Episcopate is in fact the name of a service and not of an honor, because it is up to the Bishop to serve and not dominate, according to the command of the Master:" let the greatest among you be as the youngest, and the leader as the servant". (Lk 22, 26-27). Begin your episcopal ministry in a social environment in a multifaceted crisis. Be particularly attentive to the unity of the portion of the People of God that is entrusted to your care".
It is in these terms that, in his homily, Mgr. Ernest Ngboko, Archbishop of Mbandaka-Bikoro and Apostolic Administrator de Lisala, principal consecrator, urged Mgr. Félicien Ntambue, new Bishop of Kabinda, during the mass of his episcopal consecration, celebrated in Kabinda on Sunday 27 September.
The mass was attended by a large crowd of faithful from all over the diocese, who could not hide the joy of finally having a Pastor at the head of their local Church, after almost 2 years.
In addition to the numerous Bishops of the National Bishops' Conference of Congo, there were also several consecrated persons from the neighboring dioceses. The missionaries of the Congregation of the Immaculate Heart of Mary (CICM) of which the new bishop is a member, were present to support their confrere, who came from different cities of the country, as well as from Zambia, Nigeria and Mexico.
Their Superior General, Father Charles Phukuta arrived from Rome. He thanked the Holy Father for the trust he places in the CICM family, while acknowledging the great responsibility that falls on a diocesan bishop. Father Charles brought Mgr. Félicien a statue of a sleeping St. Joseph as a gift, which evokes a spirituality dear to Pope Francis. He accompanied him with these words: "Mgr. Félicien, do not forget the importance of rest despite the problems and difficulties that you will surely have. God who sends angels to speak to Joseph in a dream while he sleeps will bring wisdom and solutions to your many problems when you will trust your worries to Him before going to bed".
Mgr. Félicien Ntambue expressed his gratitude to the Holy Father for the trust placed in him, and to his confreres in the Episcopate for their presence. Aware of linguistic and ethnic diversity and faithful to his motto ("cor unum et anima una"), the new Bishop of Kabinda is committed to working for unity. "I will not let myself be carried away by any trend, because my mission is to bring people together", he told the crowd of faithful full of joy.
Kabinda is the capital of the Lomami province in the Democratic Republic of Congo. It is located in the Kasai region, about 150 km east of Mbujimayi. Mgr. Félicien Ntambue was appointed Bishop of the diocese on 23 July 2020. Until then he was one of the general councilors of the CICM congregation in Rome. He thus becomes the 4th Bishop of the diocese of Kabinda since its foundation in 1953. To date there are 9 CICM Bishops in the Democratic Republic of Congo, of whom 4 have already retired. (M.B.P.) (Agenzia Fides, 28/9/2020)