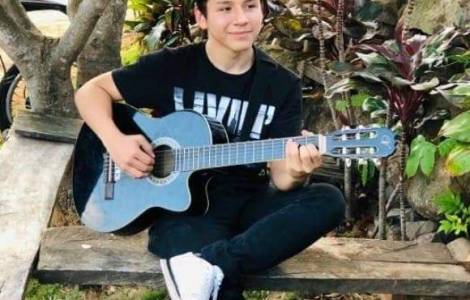 Matagalpa (Agenzia Fides) - "The death of young Bryan José, from our city of Matagalpa, once again shakes Nicaraguan society. He belonged to our 'Pastorale Cristo Joven' of the Cathedral and his parents work with us in the Meetings of Spouses. my prayer and my love, as Pastor, for the family": with these words Mgr. Rolando José Alvarez, Bishop of the diocese of Matagalpa, commented in the note sent to Fides, the terrible news of the boy's death.
The lifeless body of the young musician, Bryan José Coronado Zeledon, 17, was found along the bank of the Rio Grande in Matagalpa on Saturday 19 September. The first hypothesis was that of an accident in the river, but the signs of violence on his body prompted the victim's uncle to report the murder at the hands of crime. Violence in Nicaragua has increased exasperatedly in the last 72 hours: 4 women victims of femicide and 3 young people killed, in Matagalpa alone. So far the circumstances of Bryan José's death are still unknown, the police of the city of Matagalpa are investigating the case.
The violent death of the young Catholic caused consternation both nationally and internationally. In the note sent to Fides, Elvira Cuadra, an expert in urban security, points out the cause of this violence in a few factors: the repression policy carried out by the government, as the police are completely dedicated to political repression actions rather than guaranteeing security to the population; the existence of paramilitary groups and the release of criminals by the authorities.
According to José Davila, economist and political analyst, member of the opposition in the group of the Civic Alliance for Justice and Democracy, "this dictatorship does not seem to yield. It is out of control". The latest events demonstrate this, such as the closure of Canal 12 on television, which was also publicly criticized by Mike Pompeo, United States Secretary of State. In addition, the intervention at the United Nations Assembly by the High Commissioner for Human Rights, Michelle Bachelet, who stressed that not only is there no progress in Ortega's government to resolve the crisis in the country, since 2018, but that the latest official statement by the President, last September 15, is serious because he proposed a law against hate crimes. (CE) (Agenzia Fides, 21/9/2020)

AMERICA/BOLIVIA - Great participation and respect for all in yesterday's poll