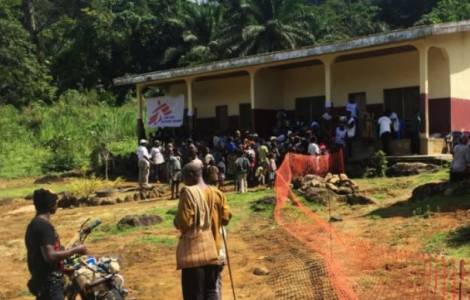 2020-11-06
Cardinal Tumi kidnapped, engaged in the peaceful resolution of the conflict in the English-speaking regions

Bamenda (Agenzia Fides) - In Cameroon the civil war continues, if anything it is getting worse. In recent weeks, the clash between English-speaking rebels and the police forces sent to quell the revolt has caused dozens of victims. Neither the danger of the coronavirus nor the opening of talks, currently very confidential, has stopped the clashes. "We have heard that peace talks have been started - explains a religious who works in Bamenda region -, but here the authorities deny and continue to say that there is nothing concrete. This confuses us".
The crisis is rooted in Cameroon's declaration of independence (1960). Since then, frictions between the English-speaking minority and the French-speaking majority have increased, culminating in 2017 with the declaration of independence of the irredentists and the birth of the Republic of Ambazonia (from Ambas Bay, the bay of the Mungo river that in colonial period marked the border between the Republic of Cameroon and south-western English Cameroon). From that moment, the confrontation, which until then had been confined to the political debate, resulted in serious clashes between separatists and the regular army. According to the United Nations, the conflict killed over 3,000 people and forced half a million inhabitants to flee to the French-speaking regions of Cameroon or neighboring Nigeria.
The testimonies of the missionaries on the spot, who ask to remain anonymous, are increasingly dramatic. "The situation - continues the religious - is not improving at all. Fighting increases every day. The military set up armed posts in strategic places. The rebels periodically attack them which result in intense and bloody fighting".
In recent days, religious have heard heavy gunshots. "We have been told that some people have been killed - continues our source -. A strict curfew has been imposed since Monday and it is not possible to move from home".
In recent weeks, many houses have been destroyed, the missionaries explain, and the inhabitants find refuge either in the woods or in parish houses or religious communities. These are poor people who no longer have a roof under which to take refuge or the minimum to survive. The rainy season then complicates their situation.
"In this part of the country - the missionaries continue - people live on agriculture by cultivating small plots of land. Now they have nothing. The corn they planted in the past few months was growing well, thanks to the heavy rains. Recently the military ordered to destroy all plants because rebels most probably hide in the fields. In the coming months, civilians will certainly suffer from hunger. The situation is very difficult".
The situation is difficult even for the little ones. At the moment there is no talk of reopening schools. "It would be too complex - observes the missionary -. The drama is that these boys and girls, in addition to suffering from the war, will also suffer in the future from the educational gaps caused by the inability to attend regular courses. It will be a real tragedy for these provinces".
In this tragic context, the coronavirus has also spread. According to official statistics, there are just over 16 thousand cases and 370 dead. "We fear that the epidemic is underestimated by the authorities - the missionary concludes -. There are probably many more cases. On our behalf, we do everything to reduce the risk by continuing to provide face masks and distribute sanitizers to the population. Will it be enough to contain the virus?" (EC) (Agenzia Fides, 25/7/2020)