AFRICA/GHANA - Jesuits in Africa: starting afresh from young people to give a prosperous future to the continent 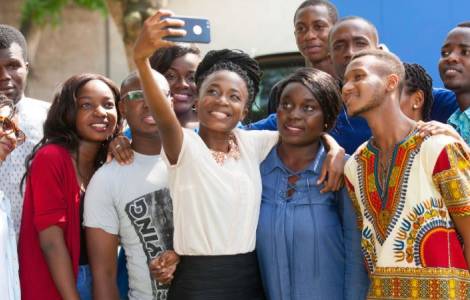 2020-07-23
Jesuits in Africa: starting afresh from young people to give a prosperous future to the continent

2020-07-09
Covid-19 - For the Bishops: "too many people do not respect the security protocols in the demonstrations for the December vote"

2020-03-17
Coronavirus: "Respect the guidelines of the government"; the invitation of the Bishops to the faithful

2020-03-14
Coronavirus: Youth Day postponed in the Archdiocese of Accra

Accra (Agenzia Fides) - Starting afresh from children to build a peaceful future in Africa. Rely on their energies to transform the continent into a better place. This is the sense of a virtual meeting, the first of a long series, organized online by the Arrupe Jesuit Institute (AJI) in Ghana, awaited by hundreds of young people from various countries including Kenya, South Sudan, Uganda, Congo, Ghana , Zimbabwe. Evocative title of the web-conference was: "African youth sowing seeds of peace" and was led by Father Augostine Edan Ekeno, a Kenyan Jesuit who works in Rumbek, South Sudan.
Reached by Agenzia Fides, Father Ekeno explained the genesis of the initiative and future developments as follows: "Over 200 young people from many parts of the continent connected in the first meeting on Sunday 19 July, somealso followed us from Europe. Immediately afterwards, working groups were formed that will meet in Jesuit social centers, scattered in various African countries, to promote actions and return to connect for the next meetings. In Africa, more than half of the population is under 25 years old: children represent a precious resource yet they are either forgotten and considered a problem or exploited by the lords of war and violence for their dirty interests. Let's not forget how widespread the phenomenon of child soldiers is, or the recruitment of poor children, who are easily manipulated by acts of terrorism or to create tensions. On the contrary, we know that their enormous presence can be a very powerful instrument of peace and for this reason we aim to involve them by transforming them into real operators and protagonists of reconciliation and development in their contexts".
In various countries - noted the Jesuit - there are serious crises or situations of real conflict. Individuals learn from childhood, to contrast and grow with the myth of confrontation or war: "Many young people find themselves with a rifle in their hands or are used to create chaos - as in Kenya in the pre and post-election periods or in South Sudan or in other areas - for a handful of money, but they do not even know what or who they fight for. Some feel rivals to others but do not know why, they are seriously manipulated by the enemies of peace. In reality, if accompanied and trained, they unleash a great potential for peace. We put the culture of encounter at the base of our meetings and encourage peaceful conversations that help to exchange experiences. They are spaces for involving children and sharing their problems. We hope to multiply this type of meeting in all our centers across the continent, to use small communities or parishes to encourage new civic education and a positive role for young people".
It is urgent to overturn the culture of social, tribal and ethnic hatred by unmasking its inconsistency and its profound groundlessness: according to Father Augustine, this is the point on which to change the face of Africa. "There are places where you grow up thinking that others are always a danger to your survival. And when, due to problems related to famines, wars, lack of work, the population is in serious difficulty, rather than looking for alternatives, one thinks of finding scapegoats, an enemy. This is why we are creating conditions to encourage work alternatives, methods of cultivating the land where it is no longer possible to deal with livestock for example, and help young people to be employed in activities that create the good of their own country".
The Jesuits in Africa mobilize to spread peace and start from the young. A second meeting will take place in the next few days while the circle of young people involved is widening. "Everyone has taken the initiative very seriously and is taking steps to create an agenda that must focus on politics. We Jesuits stand by their side to guide and accompany them. During the conversation which has just ended, the serious problem of the proliferation of weapons emerged; all agreed that too many weapons of all kinds are circulating in different societies and nations. Our goal, therefore, must be to involve governments and ask for new policies. In the meantime, we aim to expand our network. I am sure that from the next meeting open to all - on 25 July - we will take further steps forward". (LA) (Agenzia Fides, 23/7/2020)

ASIA/SINGAPORE - During the pandemic, Biblical Apostolate groups promote a personal encounter with the Word of God