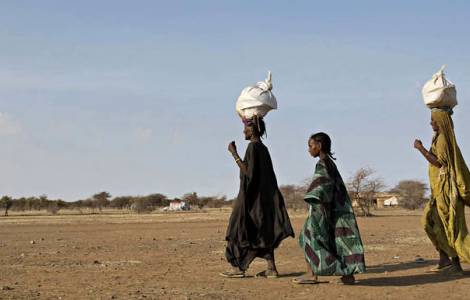 2020-06-17
"An institutional crisis must be avoided, the date of the general elections must be respected" urge the Bishops

Ouagadougou (Agenzia Fides) - In the coming months, over 2.2 million burkinabés are at risk of starving due to ongoing conflicts and extreme climatic conditions (see Fides, 30/5/2020). In 2020, the number of people affected by the serious shortage of food is three times higher than last year. The emergency was launched, in a message to Agenzia Fides, by Father Constatin Sere, director of Caritas Burkina Faso, who declares: "the world has forgotten the crisis in the Sahel. Countries like Burkina Faso face a series of challenges and without help people will suffer terribly. Internally displaced people do not have access to food or water, which is essential for both drinking and personal hygiene".
In the note sent to Agenzia Fides, it emerges that the Country has become the epicenter of a dramatic regional conflict that has caused more than one million internally displaced persons. "It is one of the fastest-moving waves of internally displaced people in the world and unfortunately hundreds of thousands of people have neither food, water, nor adequate shelter", notes the document.
Father Sere also said that as the rainy season approaches, the conditions of the displaced people become even more critical, as most of them do not have adequate shelter to deal with the storms, strong winds and floods that will follow in the next three or five months.
To support some particularly critical areas, Caritas has launched a 600 thousand euro project to provide food to displaced persons and families, as well as an economic contribution until the end of October 2020. The project, which aims to help about 50 thousand people, will concentrate mainly in the dioceses of Kaya, Fada N'Gourma, Nouna and Dédougou. The food packages offered to about 1,500 families will contain enough food for a month.
As Father Sere reports, all burkinabés, and the internally displaced people in particular, continue to hope for peace and a return to normality. "If you ask a displaced person what they want most, they will answer that they want to return to their village of origin. I fear that this will not happen very soon, because violence shows no sign of diminishing. Despite commitment from the State, armed groups in our Country continue to sow terror and break lives". "The future is worrying, but we continue to place our faith in God and in the love of our brothers and sisters all over the world", concludes the director of Caritas.
Until not long ago, peace reigned in Burkina Faso. But for 4 years now, armed groups operating along the northern and eastern borders of the country have continued to kill and terrorize citizens, causing serious instability in the Country. (AP) (Agenzia Fides, 6/7/2020)