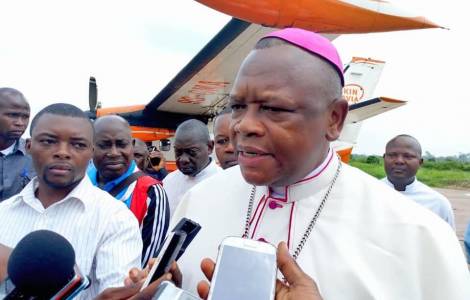 Kinshasa (Agenzia Fides) - "A quick glance at the past sixty years shows that this dream of redeeming the Congolese from colonialism has been progressively destroyed by a series of events", said His Eminence Cardinal Fridolin Ambongo, Archbishop of Kinshasa, during the Mass homily to celebrate the 60 years of independence of the Democratic Republic of the Congo.
"We have known a succession of autocratic regimes that rise to power like colonists without any concern for the will of the people and this continues to this day: by force, wars or shrewdness, fraud and the installation of a selfish system in the management of public affairs instead of promoting the common well-being of the Congolese people to whom they believe they should not be accountable because it is not thanks to him/her that they came to power", accused the Cardinal.
The lack of democratic power translates into a general impoverishment of the population of a country endowed with immense natural resources. "60 years after their adhesion to international sovereignty, the Congolese people continue to be impoverished to the point of being classified today among the poorest peoples of the earth", says Cardinal Ambongo.
During the homily, the Cardinal denounced the depredation of DRC resources by bordering Countries with the complicity of Congolese politicians, soldiers and officials. In particular, he recalled the east of the Country, "the situation in Ituri, with the insecurity managed by some officials of Kinshasa; the situation in Beni-Butembo, with the ADF-NALU which is still there. How can we explain that an entire army of a Country like Congo is unable to remove a few people who are in the bush of Beni?", asks the Cardinal referring to the jihadist guerrilla group of Ugandan origin who for years has been sowing death and destruction in this area.
The Cardinal also recalled "the situation in South Kivu, in the diocese of Uvira, near Minembwe, where the armies of neighboring countries, Rwanda and Burundi, are there to challenge us. And the situation in Tanganyika: even Zambia, which until now has been considered a friendly Country, dares to occupy our territory". "The truth is that Congo, which has 9 neighbors, are all present in our Country: either with their armies, in most cases; or with their immigrants. We know that the employment policy of our Country is hidden behind immigrants. This is the case in the far north, with refugees from the Central African Republic and Mbororo shepherds", the Cardinal accuses. "As for the stripping of its natural resources, this takes place in broad daylight, with the complicity of some Congolese, without the population being able to really benefit from it".
"What have you done with your Country? What have you done with all this wealth, all this potential that I have given you free of charge", underlines Cardinal Ambongo according to whom rivalries within the government coalition risk "dragging the whole Country into total chaos". Therefore according to the Cardinal "the ruling coalition has lost its raison d'etre and should disappear. It is the responsibility of those who formed it, the President abs outgoing President, to break this coalition that conditions the development of our country".
Cardinal Ambongo's harsh stance accentuates the differences between the main religious denominations and the government of Kinshasa for the reform of justice and that of the Independent National Electoral Commission (CENI, see Fides 1/7/2020). (L.M.) (Agenzia Fides, 2/7/2020)