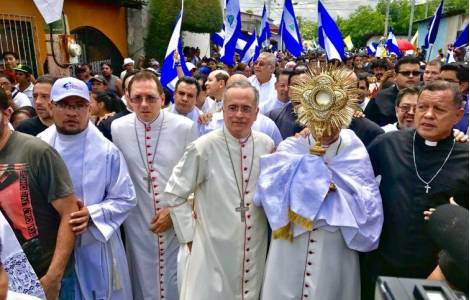 Managua (Agenzia Fides) - "Do not be afraid of those who kill the body" (Mt 10,28). Two years ago, on June 21, 2018, the Bishops went to the city of Masaya to be close to the people, pray with the people and avoid another massacre on behalf of the regime's violent forces", with this message written yesterday in his Twitter account, Mgr. Silvio José Baez, Auxiliary Bishop of Managua, who still lives in Rome for security reasons, recalls what the people of Nicaragua experienced two years ago.
The bells of the churches of the city of Masaya rang without stopping, not to warn of the arrival of death squads, formed by police and paramilitaries, but this time with a reason for hope: the arrival of some members of the Episcopal Conference and of the Apostolic Nuncio, who after learning that Masaya had been attacked once again since 5 in the morning, arrived almost immediately on the spot, to stop the massacre (see Fides, 22/6/2018).
"It was very risky, but seeing the Bishops walking on the street, the whole population came out of their homes and joined them. They were believers and non-believers, Catholics and non-Catholics, but all together, in silence", this is what Fides source reported, which was published two years ago. The situation in Masaya was really tense and the worst was feared at some point. Cardinal Leopoldo Brenes, the apostolic Nuncio, some Bishops and priests of Managua were present.
"At the door of the church of Masaya, in front of a large crowd of people, Mgr. Baez, Auxiliary Bishop of Managua, reminded the population that "one of God's commandment is: do not kill". The Nuncio also addressed the people asking them to pray the Our Father, and said: "The Holy Father is informed of what is going on here in Nicaragua". He then called on the people of Masaya not to use violence, urging everyone to believe in God as a means of overcoming violence".
After two years, the situation has not changed much, dialogue has stopped various times and many leaders have become political prisoners. The Church has informed international bodies to closely follow and enforce human rights in a country that remains stuck not because of the pandemic, but because of a lack of democracy that does not exist in the Nicaraguan reality.
The Nicaraguan Episcopal Conference (CEN) had invited Daniel Ortega's regime and the opposition to create a consensus in the face of the Covid-19 pandemic on May 23, to avoid a "major human catastrophe", in a country characterized by acute political polarization. (CE) (Agenzia Fides, 22/6/2020)

AFRICA/CAMEROON - Six students die in attack: "Today is the darkest and saddest day for Kumba"