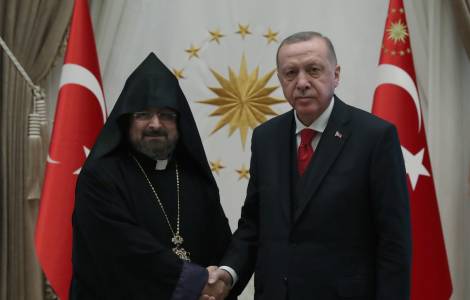 Istanbul (Agenzia Fides) - The Armenian Patriarch of Constantinople Sahak Mashalian has endorsed the idea of restoring Hagia Sophia’s status as a place of worship, today visited by tourists as a simple monument after being transformed into a mosque for 500 years. The issue of the status of Ayasopya has returned to the center of controversy in past weeks after Turkish authorities made it clear that it can also be used again as a place of Islamic worship (see Fides, 6/6/2020)
Patriarch Sahak II, at the head of the largest Christian community in present-day Turkey, entrusted his arguments to a series of messages disseminated through his twitter account. "Hagia Sophia" remarked the Patriarch via twitter - was built with the labor of 10,000 workers, spending a fortune. It has gone through numerous renovations and all those efforts were meant to keep it as a worship place but not to serve as a museum. I believe that believers’ praying suits better the spirit of the temple instead of curious tourists running around to take pictures". Based on these considerations, the Patriarch hopes that the former temple will be reopened for both Muslim and Christian prayer, thus becoming a tangible sign of a possible "alliance" between Islam and Christianity. The site - remarks Sahak II - "is large enough to allocate a space for Christians", so that "the world can applaud our religious peace and maturity". The Patriarch further stated that humanity was praying for such unity and suggested sharing the dome of Hagia Sophia: "Even though our faiths are different, don’t we believe in the same God?" Having been a place of worship for Christians for 1,000 years and another 500 years for Muslims, he stated that Hagia Sophia won’t mind it.
Hagia Sophia, the place of "Holy Wisdom", will inform you that there was nothing more precious than peace in the history of humanity". The patriarch, implicitly offering a bank to the "neo-Ottoman" ambitions of the current Turkish leadership, also underlines that in the current world "we cannot afford the luxury of a new conflict between the cross and the crescent. The salvation of the world is the covenant of the cross and the crescent. And the honor of manifesting such peace to the world is worthy of the Republic of Turkey".
The declarations of Armenian Patriarch Sahak II on the future of Ayasofya are likely to rekindle controversy on an issue that in recent weeks has also returned to fuel tensions and oppositions, including geopolitical ones (see Fides, 10/6/2020). In early June, Turkish media published rumors that Turkish President Recep Tayyip Erdogan himself had given instructions to change the statute of the monumental complex of Agyasofya, so that it can also be used again as a place of Islamic worship, without closing the building for tourist visits. The Turkish Council of State, in a session put on the agenda for next Thursday 2 July, will consider opening the monumental complex of Ayasofya to Islamic worship again, reversing the decision with which, in the 1934, the Turkish government had converted the ancient Byzantine Basilica into a simple museum transformed into a mosque after the Ottoman conquest of Constantinople (1453). The pronouncement of the Council of State will represent a strong institutional response, which will allow to evaluate the realistic possibilities of success of the pressure put in place by sectors of the Turkish political leadership to reopen the ancient Byzantine Basilica of Haghia Sophia again to Islamic worship. (GV) (Agenzia Fides, 16/6/2020)