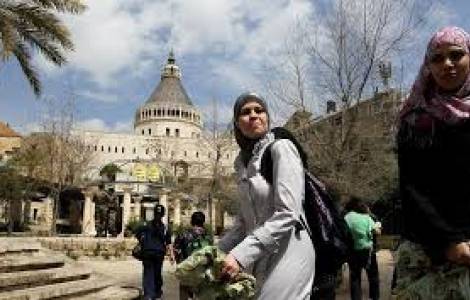 2022-01-26
Catholic bishops to the Heads of other Churches: our synodal journey needs your experience and your advice

2021-12-22
Israel responds to the Heads of Churches: your accusations are baseless and risk fueling violence

Nazareth (Agenzia Fides) - The Latin Patriarchate of Jerusalem is forced to sell land and real estate also in the area of Nazareth to face a deficit that has reached the impressive figure of 100 million dollars, caused largely by financial problems associated with the construction and launch of the American University of Madaba, in Jordan. To confirm the sale is the Patriarchate itself, with a press release, released on Friday 12 June also to counter "false and unfounded" allegations circulating in this regard in the media and social networks. "It is not a secret", the clarification communiqué reads, "that in recent years the Latin Patriarchate of Jerusalem has reached a huge deficit of about 100 million US dollars, due to past poor operational management, linked to the American University of Madaba. "The debts" adds the text "regard various banks, and not the Vatican".
The story to which the patriarchal communiqué explicitly refers is that of the American University of Madaba, AUM, a university affiliated to the Latin Patriarchate of Jerusalem, whose foundation stone had been blessed by Pope Benedict XVI on 9 May 2009, and which had been inaugurated on May 30, 2013 in the presence of King Abdallah II. At the end of 2014, the Holy See had to intervene to deal with administrative and financial problems that had marked the construction and launch of the academic institution. An ad hoc commission, established by the Secretariat of State, had in turn entrusted to a local administration committee, chaired by Archbishop Giorgio Lingua, at that time Apostolic Nuncio in Jordan, the task of "following and coordinating closely, up to July 2015, the work of the University".
Archbishop Pierbattista Pizzaballa was appointed apostolic Administrator in June 2016 also "to find a solution to these problems". Over the past four years, a major reorganization of the administration has been initiated and pursued. But given the amount of the huge debt, and despite the many efforts made to raise funds - reads the patriarchal text - "it has become clear that the only possible solution is to sell some properties". In the list of assets to be sold there are also "various properties in Jordan", which however are insufficient to pay off debts, given that in that country market prices have further decreased due to the current global economic situation. "For this reason, and after many other attempts", the Patriarchate reports - the decision was made to sell land in Nazareth. A decision "duly approved by all the competent bodies", including those of the Holy See. The land in the Nazareth area was acquired by an Arab businessman", and "over 100 dunams of land" were excluded from the sale, destined to works and initiatives "for the future benefit" of the local Christian community. The decision to sell land in Narareth - assures the patriarchal communiqué - was taken with great difficulty, but this choice represented the last resort to face otherwise unsolvable economic problems. (GV) (Agenzia Fides, 15/6/2020)