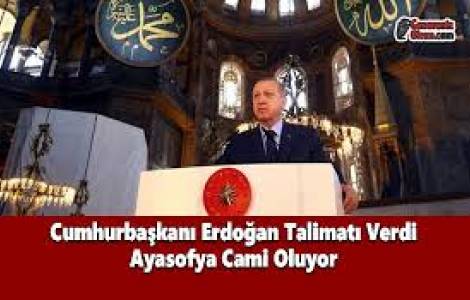 2021-11-12
In the United Kingdom and Israel, new legislative proposals to sanction the recognition of the Armenian Genocide

Istanbul (Agenzia Fides) - Turkish President Recep Tayyip Erdogan has given instructions to change the statute of the monumental complex of Agyasofya, the ancient Byzantine Basilica currently open to the public as a simple museum, so that it can also be used again as a place of Islamic worship. This is what the Turkish media reported, starting with the Hürriyet newspaper. In the edition released on Friday 5 June, citing confidential sources, the Turkish newspaper reports that the plan to change the current status of Ayasofya was examined by Erdogan himself at a meeting of the central executive committee of his Party, the AKP (justice and development Party), in power in Turkey since 2002. According to the anonymous sources cited, the Turkish President gave a mandate to those present to "Start working" in search of a formula that would make this change possible, taking into account that any restoration of the use of Agyasofya as an Islamic place of worship could take place without closing the building for tourist visits, "just like the Sultanahmet mosque (the Blue Mosque, ed)". Erdogan urged his interlocutors to carry out the project cautiously, taking into account the fact that the status of Agyasofya represents a 'sensitive' topic, on which, however, "Only our great nation can decide".
The issue of the status of Ayasopya has returned to the center of controversy in the last few days, after the Turkish government decided to celebrate the 567th anniversary of the Ottoman conquest of Constantinople - which took place on May 29, 1453 - by reading inside the ancient Christian place of worship passages from the Koran and the so-called «Sura della Conquista». The initiative provoked a harsh and immediate reaction from the Greek government.
The Byzantine basilica of Hagia Sophia was transformed into a mosque after the fall of Constantinople, and then became a museum in 1935, at the behest of Mustafa Kemal Atatürk, first Turkish President and founder of modern Turkey.
The Turkish Union of Historic Monuments as early as 2004 had submitted to the Turkish government the request to open Ayasofya to Muslim prayer gatherings, without receiving an answer. In 2005, the Council of State had already rejected the appeal filed by the Union to try to get its request approved.
In recent years, at the end of May, gatherings of thousands of people had filled the vast square outside the site to celebrate the anniversary of the Ottoman conquest of the city and ask for its reopening as a mosque.
In 2013 the then Turkish deputy prime minister Bülent Arınc mentioned on several occasions the imminent possibility of reopening the monumental complex of Ayasofya for Islamic worship. In 2014, as reported by Fides (see Fides, 31/5/2014) Saudi Imam Abdullah Basfar led street prayers organised for Saturday 31 May in front of Ayasofya Museum to demand to reopen the monument to Islamic worship. The initiative was promoted by the Committee for the Conquest of Constantinople – a body founded in 1950 under pressure from nationalist Islamic groups – and was supported by Anatolia Youth, a militant organisation inspired by the late nationalist politician Necmettin Erbakan, who died in 2011.
On September 13, 2018 (see Fides, 14/9/2018), the Supreme Court of Turkey rejected the request presented by the Turkish Union of historical monuments to transform Ayasofya into a "house of prayer" for Muslims. According to reports from the Turkish media at the time, the Court justified its contrary ruling by referring to errors of form contained in the text of the request. (GV) (Agenzia Fides, 6/6/2020)