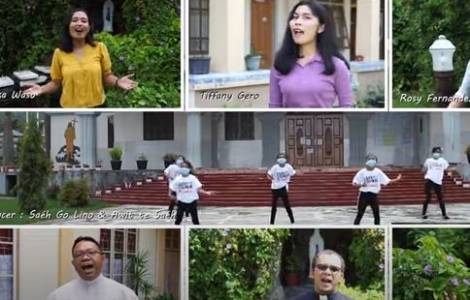 2020-10-10
Challenge of the law that reorganizes the labor market, inappropriate according to an Indonesian Jesuit

2020-10-06
Towards Mission Day: the prayer of the missionary Rosary in all dioceses

Jakarta (Agenzia Fides) - Two songs sung by Catholic nuns, priests and lay people, in the most densely inhabited Muslim country on the planet, have got the audience of social media heated on two very topical matters: the feast of the end of Ramadan, or Eid el -Fitr, and the drama of the coronavirus. The two videos reached a record audience on both Instagram and Youtube with a simple, but very effective message: "The beauty of a life in tolerance" is the title that the three Catholic nuns Eufrasia, Vincentine and Dorothea dedicated to the "brother who celebrates Eid ". The three nuns sing a message of coexistence in front of an altar that has collected 40 thousand views on the Youtube channel and over 600 thousand on Instagram. In one of the many comments from youtube viewers, Tyon Setyono wrote: "MasyaAllah is beautiful, melodious, cool. This is the essence of tolerance". Also the video song "Kamu untuk Kita" (You for us) dedicated "to the fighters at the forefront of the Covid-19 pandemic" is appreciated, conceived, sung and recited by bishops, priests, young people, boys and girls, from the diocese of Ruteng , on the island of Flores: ten thousand visits on Youtube.
The number of visitors and appreciation are a sign of the desire to cultivate coexistence in a difficult moment for Indonesians: the government has just decided that this year, precisely because of the pandemic and the closure of Mecca and Medina, the traditional pilgrimage it will not be done. The announcement was made on June 2 by the authorities and it is bad news for the quota reserved for Indonesia: 221 thousand pilgrims on the list for "Haji", the journey that every good Muslim must make at least once in his/her life (2 and a half million pilgrims went to places of worship in the Saudi kingdom in 2019). Many had already paid the membership fee for the trip (which varies between 2,100 and 2,700 US dollars), a "political" price which is controlled and managed by the government which will now have to give the money back.
On the Covid-19 front, the country is still in full swing: on 3 June Indonesia woke up with 27,549 cases and 1,663 deaths: numbers which are still low for an archipelago of 270 million souls, while controversy is raging both on investigations of the causes of deaths, and on the few tests carried out and on internal mobility which is difficult to control.
The situation is so complex that President Joko "Jokowi" Widodo has decided to use the army to maintain physical distances and lockdown rules. The decision has been widely criticized by public opinion, as it is feared that the government will take an authoritarian turn. Observers see the risk that President "Jokowi" may reduce or cancel the law on the autonomy of the provinces, one of the great victories of the "Reformasi" (Reform), the period following the thirty-year dictatorship of Suharto, taking a step back in the still young democratic process. (MG-PA) (Agenzia Fides, 3/6/2020)

AMERICA/BOLIVIA - Great participation and respect for all in yesterday's poll