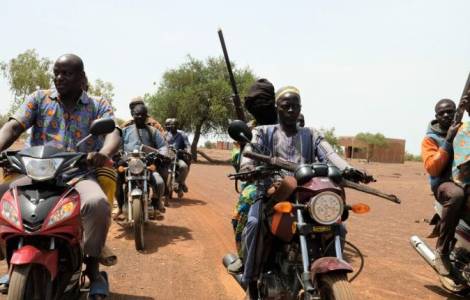 Ouagadougou (Agenzia Fides) - In the north-east of Burkina Faso, since the beginning of the year, there have been at least five attacks against Christian communities. Over 2000 schools have been closed. Since 2012, there are over 700,000 displaced people. In an area increasingly under the control of radical Islamist groups, the risk of a conflict with religious claims becomes tangible. The goal of terrorist groups is to create hostility using the ethnic-religious pretext in a society that is alienated from tensions of this nature.
Since 2012, the entire Sahel area has become the base and hotbed of numerous jihadist groups. The Sahel, which in Arabic means shore, just as Sahara means desert, is - precisely - that African area that is located immediately below the Sahara desert, which marks the transition, by climate and vegetation, from the desert area in the savannahs, where the rains are frequent and abundant. It is an immense area, which extends from the Atlantic in the east to the Red Sea in the west. For a total of 5km² and which has a population of about 93 million inhabitants.
As observed by an analysis by the International Crisis Group, entitled "The social origins of jihadist violence in northern Brukina Faso", and as stated in several other studies, the extremist forces established in the Shael burkinabé and in the east of the country, whose regional capital is Fada N'gourma, they easily managed to inhabit the territory by leveraging the sentiment of political and economic marginalization present in the area. Dubbed the "red zone" for heavy criminal activity, the Sahel is a crucial smuggling area for the local economy. Cigarettes, fuel, ivory, weapons, drugs and various consumer goods pass through the area every day. The east region allows, in fact, access to the coasts of Benin, Ghana and Togo. In addition to the strong illegality of the territory, there is the lack of public investments, very low access to water and electricity, as well as a poor schooling. Only 10% of heads of families have had higher education in primary school, and more than 60% have never had access to education.
Jihadist forces took advantage of this situation of endogenous fragility to establish themselves permanently in the region. (...) (-continues)