AFRICA/IVORY COAST - After the epidemic, we must think of "re-evangelization" 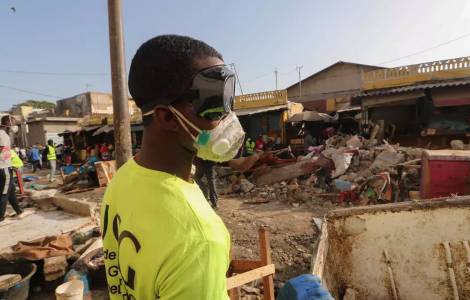 2020-06-01
"Attractiveness, gratuitousness and humility" are the key words of the Pope's message to the PMS for the National Director of the Pontifical Mission Societies

2020-05-30
The Marian shrine of Our Lady of Africa, among the shrines that will join the Pope in the Marian prayer

2020-05-26
The Bishops express their condolences to the Muslim community following the death of Cheick Aimah Boikary Fofana, a great figure in interreligious dialogue

2020-05-18
The commitment of the PMS in the time of Covid-19: the means of social communication, a missionary resource

Abidjan (Agenzia Fides) - "The United Nations has launched the appeal: 'We are on the verge of a global famine of biblical proportions, with over 250 million people at risk'. The African continent has been preserved from the catastrophic effects of Covid -19: infections and deaths are lower in numbers and in proportion to those recorded by other continents, but the other effects, such as economic and social, are already proving to be more deadly than the virus: people are hungry, food is lacking and there is no money for daily needs": this is what Fr. Marco Prada, priest of the Society for African Missions in Ivory Coast, reports to Fides, who talks about his conversation with two local inhabitants. The first, Jean Bosco Yao, lives in a popular neighborhood of Abidjan, Koumassi, - Fr. Prada writes to Fides - and the second, Alphonse Soro, in the largest city in the north, Korhogo, which welcomed more than one hundred thousand displaced people from the civil war the Country in the first decade of the century.
"The situation in Abidjan is catastrophic: loss of jobs, unemployed people without any measures of support, prices have soared in the city, the purchasing power of the population has decreased by 80%, the situation of those who live of informal economy is dramatic: these people and their families no longer have money and no longer know what to do to buy food", reports the missionary.
"Over half the population has no more than one meal a day", says Alphonse Soro, who is employed in a training and assistance Center for the Disabled, managed by the Sisters Daughters of the Cross, in Korhogo. "The private sector was the most affected by the closure of businesses and the layoff of a significant number of workers. Worse still for those who work in the informal sector. The Sisters who manage our Center have an endless queue of people at the door every day, knocking for some food".
"Among neighbors in my neighborhood - explains Jean Bosco Yao - we try to help each other. When you find some food to buy at a good price, one shares it. Some even offered to pay water and electricity bills for others: the government froze them for three months, but poor people are afraid of finding themselves later with a debt that cannot be paid". There were also gestures of solidarity in Korhogo: Catholic parishes and religious institutes distributed food, medicines, clothes, the doors are always open to listen, console and encourage desperate people, tradesmen in the city have donated food for the poorest.
But, Alphonse notes, "all of this is just a drop in the ocean of our people's needs". "Here in Koumassi district - says Jean Bosco in reference to religious life during lockdown - many followed mass broadcast on radio, in the morning at 6.20 and in the evening at 7 pm by Radio Espoir. On Sunday three masses were broadcast, one of which in English. Protestants and Muslims also used radio a lot to reach their faithful. "The Prefecture of Tankessé-Koun Fao also signals an original initiative by the parish priests of his area of origin: speakers were installed in the villages and towns, connected via radio with the parish, and the faithful had the possibility to listen to the rosary, the mass, biblical teachings, and even health information about the ongoing epidemic. This has been highly appreciated by people.
Alphonse Soro observes: "It was a great pain to remain without mass or prayer at the mosque, praying alone in the house. Of course, faith has remained in the hearts of most of the faithful, but some have said that they have lost faith in God, therefore, after this epidemic, we will have to think about re-evangelization". (MP/AP) (Agenzia Fides, 22/5/2020)

AMERICA/MEXICO - If the virus knows no boundaries: the caravan toward the USA does not stop