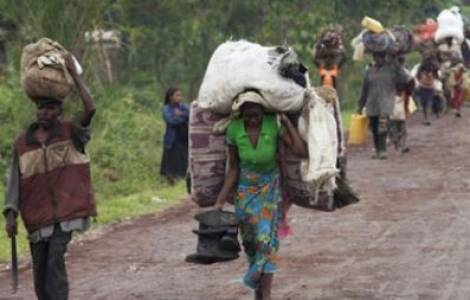 Bukavu (Agenzia Fides) - Guaranteeing small loans to remove women from a life of unheard suffering and hard work: this is the project launched by the White Fathers (also called Missionaries of Africa) in the Democratic Republic of Congo in support of the association «Femme Debout» («Women Standing»). In Bukavu, the capital of Southern Kivu (a highly unstable region in which numerous rebel militias operate), hundreds of women, from the poorest and most disadvantaged neighborhoods, carry the material unloaded from the boats to the port on their shoulders. The heavy work involves carrying huge bags on their shoulders and making dozens of trips from the port to the market and vice versa. They receive very little, 300 Congolese francs, equal to 16 euro cents, to deliver 150 kg of goods. An exhausting and endless via crucis that undermines their health. The same ordeal every day.
One hundred and fifty women, among the poorest and most vulnerable, gathered and founded «Femme Debout», a mutual-aid group that aims to help members to start a small business, safer and more profitable, and less burdensome, compared to the work they do every day. In turn, twenty women each receive a loan which they then commit to repay within six months. With this sum (small for Europe, large for Africa) they set up small kiosks, a stall where you can sell fruit and vegetables.
"These women - Angèlique Kasi, the leader of the association, explains to Fides - break their backs and are considered slaves. They are mistreated and marginalized. The decision to get together and start a micro-credit business has allowed to break this vicious circle of exploitation and misery. At the moment all the members who received the loan have regularly repaid it within the agreed terms and times. But much more needs to be done".
The White Fathers pledged to support this project, initiated and managed by Congolese civil society. "We will make 4-5 thousand euros available to the association "Femme Debout"- explains Father Alberto Rovelli, an Italian missionary in Bukavu - to Fides. In turn they will give each woman between 70 and 80 euros. The women will then return the money. Ours is not meant to be a paternalist initiative, but a project that empowers women and helps them change their destiny".
The Missionaries of Africa are mainly dedicated to the missionary apostolate among non-evangelized populations, to the cooperation and development of the local Churches. They are present in numerous African countries, both in the Maghreb area and in sub-Saharan Africa, including Kenya, Niger, Nigeria, Rwanda, DR Congo and many others. (EC) (Agenzia Fides, 11/5/2020)

AMERICA/BOLIVIA - All Saints' Day: Eucharistic Adoration and Concert "for a missionary Church"