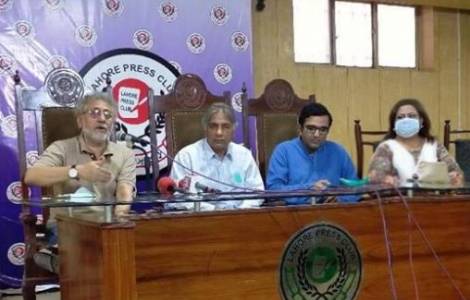 Lahore (Agenzia Fides) - The new National Commission for religious minorities, created by the government of Pakistan, risks being an empty and useless organ, without any real power. This is why it must be created, like other national commissions, through a formal act of Parliament, so that it has the necessary authority and independence in its work. This is what civil society associations and Christian groups in Pakistan say after the act of the federal government that established a new ad hoc commission, dedicated to religious minorities, in the Ministry of Religious Affairs of Pakistan. The government approved the new body on May 5, appointing a president and including three Christian members, three Hindus, two Sikhs, two Kalash and one Parsi. Archbishop Sebastian Francis Shaw, at the head of the Archdiocese of Lahore, Albert David, President of Pakistan Christian United Movement and Sarah Safdar, Secretary of the Pakistani Church in Peshawar, are the representatives of the Christian community.
Catholic Peter Jacob, head of the NGO "Center for social justice" and president of the "Popular Commission for Minority Rights", reports to Fides: "The government was aware of having to set up the Commission for minorities through an act of Parliament. The chosen path, however, does not respect the original ruling of the Supreme Court in 2014, which imposed the creation of the Commission on the government of Pakistan". Jacob adds that several organizations are ready to challenge the government's decision with an appeal to the Supreme Court of Pakistan, believing that the newly created Commission is not adequate to protect the human rights of minority communities, recalling that "it is an obligation for the state of Pakistan to safeguard and promote the interests of minority citizens, as required by the Constitution".
Yesterday, May 6, 2020, rights groups, lawyers, academics and civil society activists criticized the government's decision stating that its creation, in current terms, does not comply with the indications of the Supreme Court. Hina Jillani, Supreme Court lawyer and former UN Special Rapporteur, said: "The Commission for Minorities will only be effective if created, like other national commissions, through an act of Parliament. Only then will this Commission have real authority and be independent in its work".
Catholic Michelle Chaudhry, president of the "Iris and Cecil Chaudhry Foundation" specified: "Our protest does not concern the members of the Commission but the establishment of the commission itself. It is urgent that the Commission is formed with adequate means and that it has a legal status that allows it to truly deal with the human rights of religious minorities in Pakistan". (AG-PA) (Agenzia Fides, 8/5/2020)